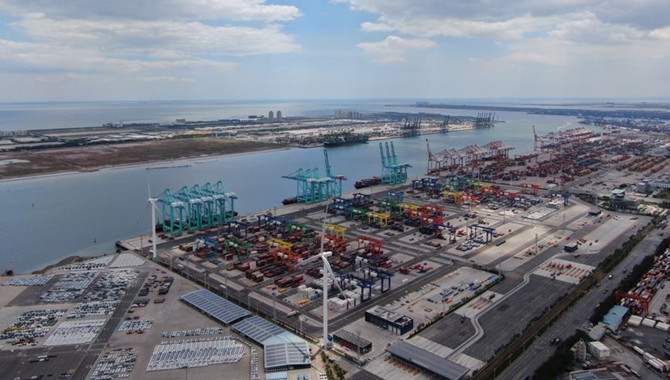 Tianjin Port announced on Tuesday the inauguration of the world's first container terminal empowered by the internet of things and the first batch of the zero-carbon ro-ro terminals.
The IoT-driven container terminal is an upgraded version of the world's first zero-carbon terminal in Section C of the Beijiang port area, which made its debut in October 2021.
The first zero-carbon ro-ro terminals include three leading terminals.
They are recognized by the China Classification Society, which granted the carbon neutral certificate to the port.
The IoT terminal has installed more than 100,000 sensor-connected facilities, covering all infrastructure, including energy management and intelligent buildings.
Efficiency has increased fivefold over traditional terminals, slashing the time for cargo loading and unloading by up to 26.2 percent and increasing the anchoring time for ocean vessels by 28 percent, said Yang Rong, general manager of Tianjin Port No 2 Container Terminal Co.
Tianjin Port has seen wind power and photovoltaic installations reach up to 280,000 kilowatt hours, generating green power up to 60 million kWh, enough to save 18,000 tons of coal and slashing up to 50,000 tons of carbon dioxide.
Last year, the port's overall container throughput hit 21 million twenty-foot equivalent units. The facility's growth rate hit a four-year high, placincg it among the top 10 ports in the world.
The ongoing campaign by the port honors its commitment to carbon reduction and neutrality, said Chu Bin, Party chief of Tianjin Port Group.