Hambantota Port to be a Multipurpose Port 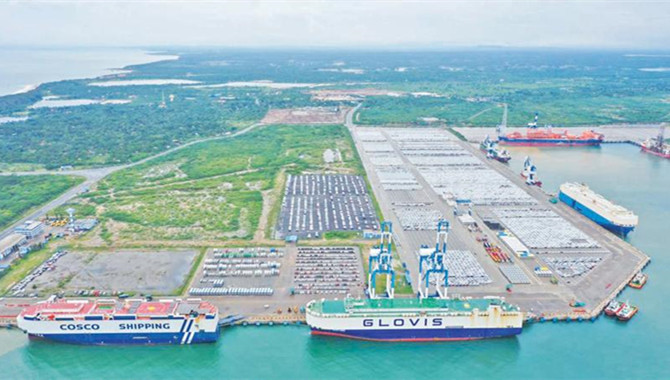 The Hambantota port is located in a small fisheries village called Hambantota, in Sri Lanka which is known by many worldwide due to the limelight given by western mainstream media with regard to the “debt trap” diplomacy narrative.

The port itself is a unique economic pivot to relink the ancient maritime silk route hence it was prioritized by China's Belt & Road Initiative. The name of the city Hambantota was derived from the Sinhala word "Samban" which is known as a relatively flat-bottomed wooden boat and "Thota" meaning "Port". However, due to the rise of conflicts between countries over the land silk routeconnecting ancient Alexandria with China, a maritime silk road was created as an alternative towards the land-based silk route.

The ancient maritime trade silk route flourished between the 2nd century BCE to 15th century AD and during this era a port in Hambantota area was known as a center linking this maritime silk route.It is said that the Chinese and the Arab's used to stopover at Hambantota region when transporting trade by the sea.

Today this sea route is called the 'East-West Shipping Route' which is located at about 10 nautical miles from Hambantota Port and annually around 40,000 ships use this route passing the Southern Sri Lankan port city.

Since the Sri Lankan government was interested in developing an international port in Hambantota for decades, a Canadian company SNC- Lavalin concluded a feasibility study of the Hambantota Port in 2003 at a cost of US$ 1.5 million and concluded that a port at Hambantota was feasible. Similarly, back then the SNC- Lavalin was interested in build–own–operate–transfer arrangement for the proposed Hambantota Port with Sri Lanka. Another feasibility study was conducted in 2006 by the Danish engineering firm Ramboll and the conclusion was similar to the SNC- Lavalin.

Following the construction of the Hambantota port, many regional countries had concerns and took precautions to keep their ports in business realizing the potential of the upcoming Hambantota port.

However, the port was constructed in two phases but due to difficulties with finances, the Sri Lankan government decided to privatize an 80% stake and awarded the tender to China Merchants Port (CMPort) which isone of the leading ports operator companies in the world. CMPort paid US$ 1.12 billion to the Sri Lankan government to lease the port for 99 years and on top of that CMPort had to invest around US$ 1.5 billion to bring the port to operational levels.

The Government of Sri Lanka says that it is working to make the Hambantota Port a fully operational multipurpose port by 2022.  Since the new management took over, the Hambantota International Port has witnessed overall growth in volume and diversification of services

The Sri Lankan government has said that despite the COVID pandemic, the Hambantota International Port continued to operate without interruption and the experienced port management team at the port was able to continue the high level of service rendered to their customers.

The Hambantota Port Group operates the bulk supply of fuel for merchant ships in partnership with Sinopec Lanka, a local subsidiary of Sinopec, a leading Chinese energy company. At the end of June 2021 LPG, VLSO & MGO recorded a growth of 20% from 179,51 metric tons to 215, 094 metric tons compared to June 2020.

The Government of Sri Lanka intends to establish the Port of Hambantota as a fuel supply hub in South Asia and to transform it into a fully functional multipurpose port by providing high-quality products and security services.

Conversely, the Hambantota Port is an asset to Sri Lanka and a value addition for the international shipping industry itself, as it could save sailing time and minimize the maritime traffic while operating as a regional port to maintain the opportunity cost of the industry.

Some advantages in Hambantota include competitive labor costs, freeport facilities, ample space for storage, and dry weather throughout the year. This gives HIP its competitive edge to develop as a competitive regional maritime and logistics hub.

It seems the short term plan of Hambantota port to improve and sustain the RORO business is successful and in the midterm, the port will be looking at expanding the bunking business, in long term, the port could facilitate ship repairing, free trade zones within the port and outside of the port and would be able to grasp the full potential of the Hambantota port.
Source: Yasiru Ranaraja