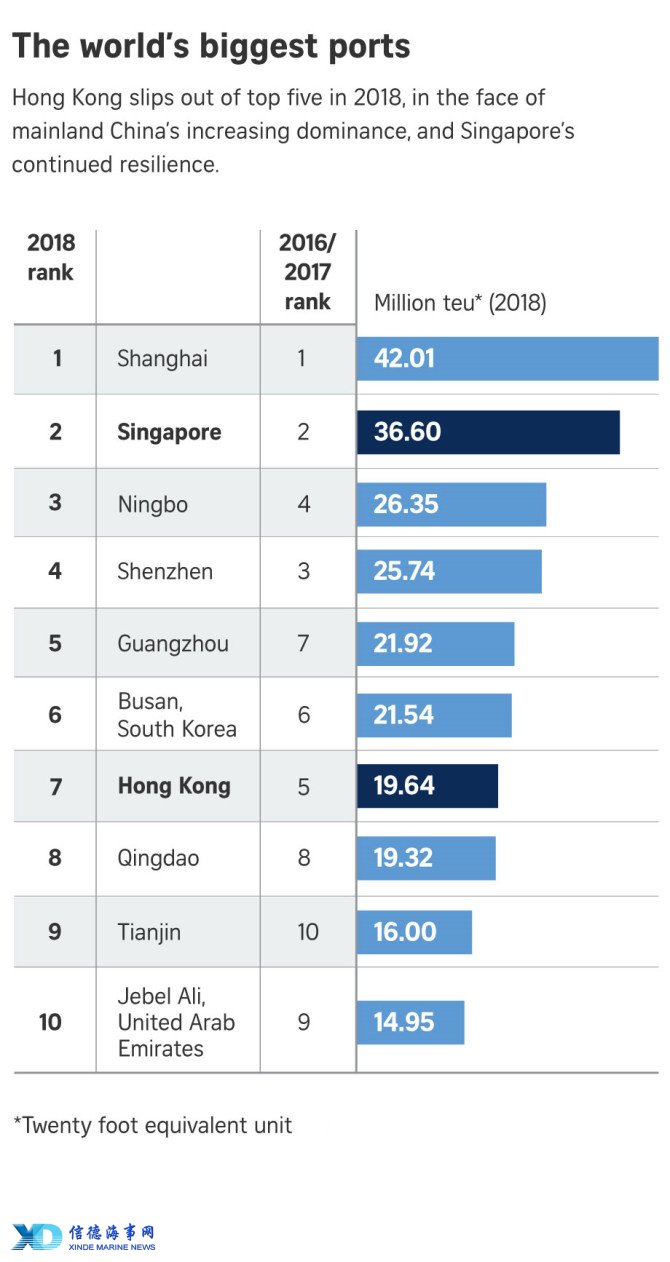 HONG KONG (AFP) - Hong Kong's port, which once vied with rival Singapore for global dominance, has slipped out of the world's top five busiest shipping container terminals for the first time, new data has revealed.
The bustling southern Chinese financial hub owes its very existence to its ideal location as a port, a cornerstone of the remarkable growth of a city's whose name means "Fragrant Harbour".
It has been among the world's busiest for the last four decades and dominated in the 1990s and early 2000s as China's economy opened up.
But last year Hong Kong's port came in at no. 7, confirmation of a seemingly inexorable slide down the world rankings against the increased dominance of mainland Chinese ports and continued resilience of Singapore.
Neil Davidson, a specialist at Drewry Shipping Consultants, said it was the first time Hong Kong had fallen below the top five threshold since they first began compiling global port data in 1979.
"For many years, through to the 1990s, Hong Kong was really the only effective port for serving southern China, as mainland Chinese ports were under-developed," he told AFP.
"Since then of course, mainland Chinese ports like Shenzhen and Guangzhou have seen huge expansion and investment in modern facilities, and have become much more effective competitors to Hong Kong."
Drewry's data for 2018 shows Hong Kong handled 19.64 million twenty-foot equivalent units (TEUs), the industry measurement based on a standard 20-foot shipping container, down from 23.54 million in 2006.
That is less than half world leader Shanghai at 42.01 million units and far behind no. 2 port Singapore with 36.60 million units.
Chinese mainland ports Ningbo and Shenzhen had previously overtaken Hong Kong but last year it was eclipsed by two more - Guangzhou and South Korea's Busan.
In 2004, when Hong Kong was still the world's busiest port, more than 150,000 vessels were filled, a figure that has now halved according to Bloomberg News.
In a bid to cut costs and improve efficiency, billionaire Li Ka-shing's Hongkong International Terminals - the city's biggest container-terminal operator - announced an alliance with rival dock operators in January.
Unlike most major ports where the state either owns or plays a prominent role, Hong Kong's ports are entirely private.
But there has been criticism that the local government has not done enough to invest in new facilities.
Authorities began studying a plan to build a tenth terminal more than a decade ago - publishing a feasibility study in 2014 - but there has been little progress.
Davidson said mainland Chinese ports had become more attractive because dock labour costs are lower, they are closer to factories and can handle bigger vessels.
"Hong Kong does have highly experienced and professional terminal operating companies, excellent facilities, and many strengths in terms of the soft side of doing business," he added.
"These factors should not be under-estimated."
Source:AGENCE FRANCE-PRESSE