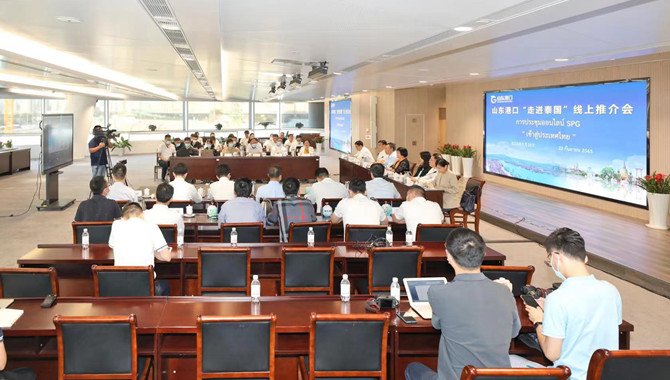 Shandong Port Group (SPG) and the Royal Thai Consulate General in Qingdao jointly held an online promotion meeting in Qingdao on Sept 22. It focused on introducing and promoting SPG to entrepreneurs from Thailand to explore cooperation opportunities and bolster win-win development.
The promotion event was also broadcast live via online channels in cities such as Bangkok and Laem Chabang in Thailand.
The launch of the online promotion is intended to help SPG build an international and open platform for more Thai enterprises to carry out broader and more in-depth bilateral cooperation with SPG.
Since its establishment on Aug 6, 2019, SPG, the most economical and convenient shipping outlet along the Yellow River Basin to the sea for ASEAN member countries, has comprehensively formed a shipping route cluster that connects itself with countries involved in the Belt and Road Initiative and member states of the Regional Comprehensive Economic Partnership. Three new direct container shipping routes to Thailand were opened in July this year, and currently, it has opened 45 direct shipping routes to Southeast Asia, including 13 direct routes to Thailand. Eighteen international well-known shipping companies have launched 13 daily direct shipping routes to Thailand's Lim Chaban Port and Bangkok Port per week.
According to official data, all of these shipping routes to Thailand have provided more than 20,000 twenty-foot equivalent units (TEUs). Among them, the slots for reefer containers are 2,000 TEUs.
In recent years, SPG has focused on expanding its business of cold chain logistics services, aiming to build itself into a distribution center for consumer goods in northern China. Qingdao Port has become one of the major ports in North China who provides direct shipping routes to Thailand with the largest number of shipping routes, the tightest shipping schedule and the widest coverage rate. This has formed a golden seaborne channel that offers product services, high efficiency and low costs for the trade exchanges between regions along the Yellow River Basin and Thailand.
Due to the strong demand for cold chain products from the hinterland market, SPG has cooperated with world-leading carriers such as COSCO SHIPPING and Maersk to upgrade the direct premium cold chain express route for traders in Thailand. Cold chain products from Thailand such as coconuts, durians and longans can arrive at Qingdao Port within seven days. In 2021, the growth rate of Qingdao Port's imports and exports to Thailand rose 15 percent year-on-year, and Qingdao Port's exports volume to Thailand grew 24 percent year-on-year.
Going forward, SPG plans to step up efforts to densify its Southeast Asian shipping network, with Qingdao Port as the hub port, and comprehensively upgrade its direct premium cold chain express route to Thailand. SPG also plans to forge a low cost and highly efficient fruit import green channel to better serve the economic and business exchanges between China and Thailand.