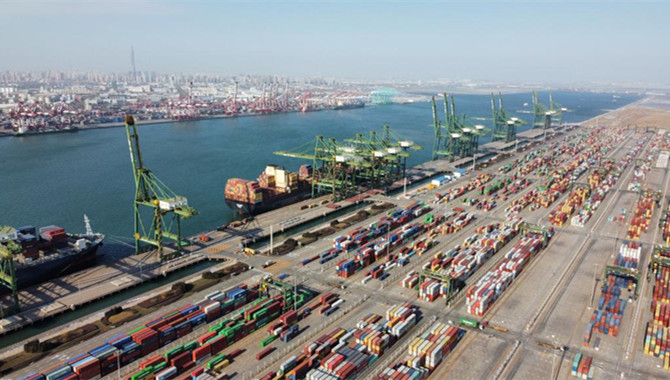 Tech giant Huawei said in a recent press release that it is partnering with Tianjin Port to boost its digital transformation, including its top-level design and dock technology innovation.
The announcement followed the company's unveiling of its Global Joint Innovation Lab with Tianjin Port and other leading universities and companies on Aug 18 in Tianjin.
Jiang Kaimin, senior marketing expert of Huawei Customs and Port Group, said: "The digitalization of ports involves many subdivisions, seeking to achieve the optimal efficiency of the overall system of people, cargoes, vehicles, ships and ports".
Based on its expertise in ICT infrastructure, Huawei is working with partners to provide ports with advanced ICT technologies, including network, intelligent sensing, computing, storage, cloud, autonomous driving components and digital energy, to facilitate green and smart transformation of ports, he said.
Taking the terminal of Section C in Beijing port area of Tianjin Port as an example, Huawei said that it is the latest practice among Tianjin Port Group, Huawei and many other partners, to build a smart and green port, which, Huawei also claimed, has achieved several global 'firsts' since mid-October last year, according to the press release.
They included the first self-developed AI-based "intelligent horizontal transportation management system", the first vehicle-road synergy L4+ driverless solution and the first zero-carbon emission terminal, across the world, which have all been put in to service since Oct 17,2021, it said.
Also in October last year, Huawei established its Customs and Port Group to foray into the sector.
According to Huawei, the group is committed to integrating the company's internal R&D, product lines and innovation lab resources, as well as its ICT R&D experience and root technical advantages, to provide digital infrastructure services for the automation and digitalization of port and new lab with Tianjin Port as part of its latest efforts to this end.
Jiao Guangjun, deputy Party chief of Tianjin Port Group, said in a previous interview that the new lab will further attract collaborations among companies and research institutes to make greater innovations in port technologies and drive transportation in quality and efficiency among global port sectors.
Market insiders indicated that the current collaboration is confronted with challenges such as whether the huge investment could generate rapid returns amid the sluggish growth among global port sectors.
For example, at the end of last year, port congestion caused severe disruptions in global supply chain. Port operations could not be fully resumed due to the shipping staff shortages brought by the COVID-19 pandemic in Europe and the United States.
This resulted in large numbers of goods being piled up in ports during Black Friday and Christmas.
To date, both Huawei and Tianjin Port have not released the exact investment on the section C of Beijiang port area of Tianjin Port.