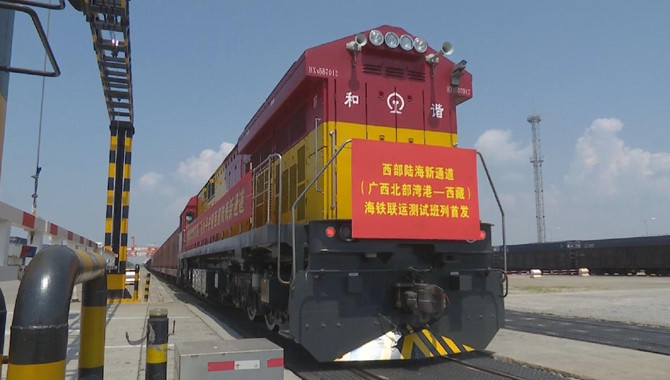 "The cargo on the freight train is expected to arrive at Lhasa West Railway Station in 12 to 14 days, then leave the country through Gyirong Port by road and finally arrive in Nepal. The trip saves about 20 days compared with the traditional route of shipping by sea," said Huang Jiangnan, station master of Qinzhougang East Railway Station under the China Railway Nanning Group Co., Ltd.

Gyirong Port, lying in the far west of Tibet, is an important channel connecting Tibet and Nepal.

"Tourism industry is booming in Tibet, and there exists a strong demand for daily necessities in Tibet. In addition, Tibet is a gateway for cargo to be exported to Nepal and other countries. Therefore, after the launch of the freight train route connecting Beibu Gulf Port and Tibet, more food and daily necessities in the southern part of China can reach Tibet and South Asia by railway," said Ji Fei, deputy general manager of Qinzhou Beibu Gulf Port Supply Chain Co., Ltd.

Under the framework of jointly building the Belt and Road, the new land-sea corridor connects China and ASEAN countries through various modes of transportation, and the benefits will be shared by all countries.

"In recent years, the transportation network of the New International Land-Sea Trade Corridor has covered 335 ports in 113 countries and regions around the world, and the categories of cargo have increased from over 50 in 2017 to over 640," said Huang.

Launched in 2017, the trade corridor is a trade and logistics passage jointly built by provincial-level regions in western China and ASEAN members.