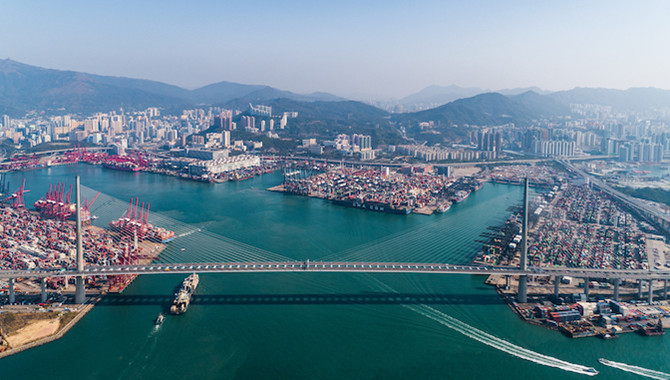 Hong Kong Marine Department figures for January to March 2022 show that vessel arrivals in Hong Kong during that period fell 10.4%. During the same period the Kwai Tsing Terminals received 2,002 vessels, reflecting a 21.4% drop from the same period in 2021.
The statistics have caused consternation among Hong Kong Government officials who fear that multiple factors are involved in the steep decline in cargoes.
“The reason for the decline could be manifold: the outbreak of the fifth wave of Covid-19 in Hong Kong and Guangdong that adversely affected port operation and trading activities, tightened pandemic control measures that disrupted cargo flows via trucks and barges, global port congestion leading to reshuffling of container liner schedules and blanked port calls,” a press officer for the Transport and Logistics Bureau stated.
“The Government is very concerned about the impact of the fifth wave of the epidemic on the cross-boundary land cargo transport and the logistics supply chain between Guangdong and Hong Kong,” he added.
Port and liner company representatives have also expressed their concern about the decline in the transfer of transshipment cargoes between Hong Kong and mainland China. One shipping executive told JOC.com earlier this week that if the trend continues Hong Kong will lose its position as a leading transshipment hub for China and the region.
Roberto Giannetta, chairman of the Hong Kong Liner Shipping Association, added the cross-border COVID-19 restrictions have had a “huge impact on the volume of China imports and exports that come through Hong Kong.”
The Task Force on Supplies from the Mainland of the HKSAR Government has been working closely with the Guangdong Provincial Government and the Shenzhen Municipal Government to improve the arrangements and enhance efficiency of cross-boundary cargo transport through various channels, with a view to ensuring a stable supply of goods from the Mainland to Hong Kong for the needs of the community and economic activities in Hong Kong.
“The HKSAR Government will continue to discuss with the Mainland authorities to allow Hong Kong cross-boundary goods vehicle drivers to drive directly to the operation points to pick up goods progressively, so as to improve the cargo volume and efficiency of cross-boundary land cargo transport,” the press officer said.
In an effort to ease the situation, the Government has also been working closely with the Mainland authorities to support cross-boundary water transportation.  In particular, the “Sea Express” water transportation service from the Mainland to Hong Kong has been launched with the facilitation and co-ordination of the Mainland authorities and the HKSAR Government as well as the active participation by the trade.  Since the launch of services from the three ports in Shenzhen from February 18 to July 31, a total of around 746,400 teu of cross-boundary supplies have been transported, equivalent to about 3.62m tonnes of goods.