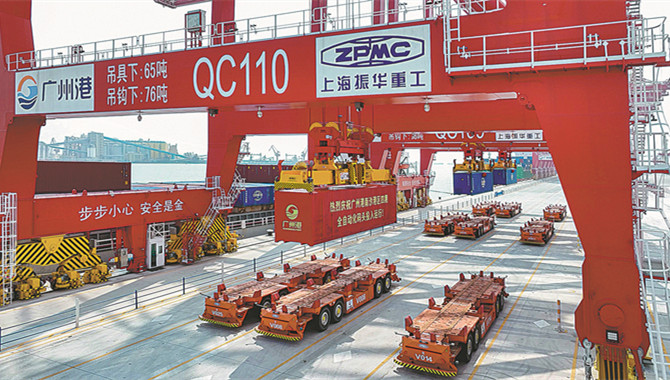 A fully automated terminal, the first of its kind built in the Guangdong-Hong Kong-Macao Greater Bay Area, began operations on Thursday at Nansha port in Guangzhou, capital of Guangdong province.
This is part of the fourth phase of the modernization of Nansha port, combining multimodal services related to sea, river and railway transportation in the area, according to Guangzhou Port Group.
Operation of the terminal will help inject momentum into the implementation of an overall plan to promote comprehensive cooperation among Guangdong, Hong Kong and Macao, the company said.
Development of a joint shipping and logistics trade center and construction of a world-class port cluster in the Greater Bay Area has become part of that plan, which was issued in June by the State Council, China's Cabinet.
The fourth phase of the port is the first fully automated container terminal built by domestic scientific and technological enterprises and institutions. It includes four 100,000 metric-ton berths and their supporting container barge berths.
Construction of the new terminal began in late 2018, having integrated advanced technologies such as Beidou navigation, 5G communications, artificial intelligence and autonomous vehicles.
The terminal adopts a new generation of automated container terminal technology by using new machines from automation equipment hardware to information systems. The new machinery led to the filing of more than 60 patents, including 31 classified as invention patents, according to the company.
"The terminal, which features smart and independent operations and low-carbon emissions, has contributed to the promotion of automated wharf technology," said Li Yibo, Party secretary and chairman of Guangzhou Port Group.
After starting operations, the new terminal will be integrated with the Nansha port's other terminals to form a specialized and large-scale terminal cluster, helping to greatly improve the port's handling capacity, according to Li.
The new terminal has a designed annual throughput capacity of 4.9 million twenty-foot equivalent units, the company said. The annual container throughput of the entire Nansha port is expected to exceed 24 million twenty-foot equivalent units. Twenty-foot equivalent is the unit used by the industry to measure the cargo capacity of a ship or a port.
"It will help enhance the function of the international comprehensive transportation hub and provide strong support for Nansha to build itself into a major strategic high-level shipping and logistics platform in the Greater Bay Area, in coordination with Hong Kong and Macao," Li said during a ceremony marking the launch of the service at the new terminal on Thursday.
The terminal has also become a green environmental protection demonstration project in the port industry, as it achieves zero emissions following the use of technologies such as new generation of Internet of Things sensing, big data analysis, artificial intelligence and other advanced technologies, said Lionel Ni, president of the Hong Kong University of Science and Technology.
"It will provide exemplary solutions for the automation upgrading and transformation of traditional terminals in the world," Ni said.
The university has teamed up with the port company and other domestic research and equipment enterprises to incorporate new technologies into construction of the smart terminal, which includes driverless intelligent guided vehicles and a low-speed automatic rail crane, said Ni.