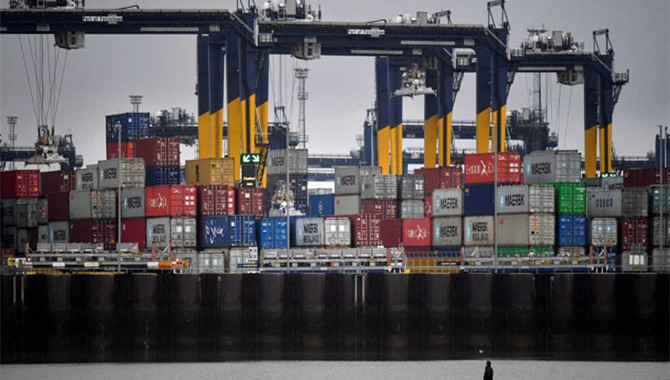 The world's largest container-shipping company is avoiding the United Kingdom's biggest container port because of post-Brexit chaos.
The Danish company Maersk said the UK's dire shortage of heavy goods vehicle, or HGV, drivers was among reasons why it started routing some cargo through mainland European ports instead of Felixstowe.
That lack of drivers has slowed the transportation of containers out of the port to inland destinations, and left Felixstowe choked up, the company said.
The UK is thought to be around 100,000 HGV drivers short of the number it needs because of its exit from the EU and the resulting exodus of drivers from the bloc. The novel coronavirus pandemic has also hit the sector. And there has been a spate of retirements among drivers.
"We had to stop operations on a ship because there was nowhere to discharge the containers," Lars Mikael Jensen, head of global ocean network at Maersk, told the Financial Times. "Felixstowe is among the top two or three worst-hit terminals (in the world). We are having to deviate some of the bigger ships away from Felixstowe and relay some of the smaller ships for the cargo."
The Financial Times said the port usually handles around 36 percent of the UK's containers.
While Brexit has exacerbated the situation at Felixstowe, ports around the world have been hit by the pandemic and supply chains have struggled to cope.
The BBC said the global challenges mean it now costs six times more than it did a year ago to ship a container from China to Europe.
The East Anglian Daily Times, a newspaper that serves the Felixstowe region, quoted Adam Searle, a spokesman from container shipping company CP Transport, as saying: "All of the issues have been experienced before at different levels at different times. But, obviously, everything has faced a perfect storm … with COVID, Brexit, driver shortages, and now port congestion."
He said the situation has become so bad at Felixstowe that his company took empty containers across the country to Liverpool last week to free up space.
A spokesman for the port said: "The pre-Christmas peak, combined with haulage shortages, congestion at inland terminals, and poor vessel schedule reliability has resulted in a build-up of containers at the port."
ITV News said that build-up means containers now spend "more than nine days" at the port, which is double the usual time.
The broadcaster said the bottleneck means there are now an additional 50,000 empty containers at the port.
The Guardian newspaper quoted a spokesman from the UK's Department for Transport as saying: "This is not a problem unique to the UK; with ports around the globe experiencing similar container capacity and supply chain issues. (We) are working closely with the freight industry, including on HGV driver shortages, to work through the challenges some of our ports are facing at an important time of the year."