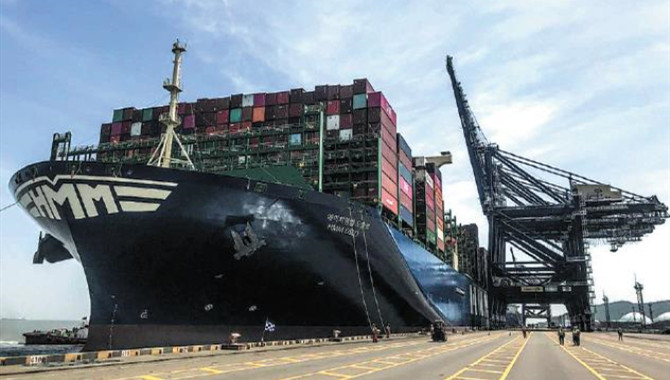 Imports and exports of Ningbo, a port city in East China's Zhejiang province, reached 710.9 billion yuan ($106.1 billion) in the first three quarters of this year, an increase of 4.3 percent year-on-year, official data from local customs authorities shows on Monday.
The city's imports stood at 246.5 billion yuan over the nine-month period, up by 4 percent, while exports increased 4.5 percent to 464.5 billion yuan.
Private companies remain the major driving force behind the city's robustly-rising foreign trade. Imports and exports from private enterprises in the city were valued at 505.4 billion yuan, an increase of 10 percent.
The European Union (excluding the UK), United States and Association of Southeast Asian Nations were the city's top three trading partners.
Official figures show that Ningbo's trade value with the three economies stood at 126.5 billion yuan, 123.9 billion yuan and 78.5 billion yuan, respectively, with the combined value accounting for 46.3 percent of the city's total.
Imports and exports to and from countries and regions involved in the Belt and Road Initiative were valued at 197.6 billion yuan, accounting for 27.8 percent of the city's total.
In the first nine months of this year, exports of mechanical and electrical products and labor-intensive products stood at 251.8 billion yuan and 132.1 billion yuan, respectively, representing increases of 3.3 percent and 10.5 percent, respectively.
Commodities imported by the city were primarily mechanical and electrical products, high-tech products, copper, ore and agricultural products.
In another development, from January to September 2020, Zhejiang (excluding Ningbo) posted a combined foreign trade volume of 2.44 trillion yuan, up by 8.6 percent from the same period last year, statistics from Hangzhou Customs showed on Monday.
The province's exports stood at 1.81 trillion yuan over the nine-month period, rising by 7.5 percent, while imports amounted to 628.6 billion yuan, an increase of 12.1 percent.
Source:Chinadaily