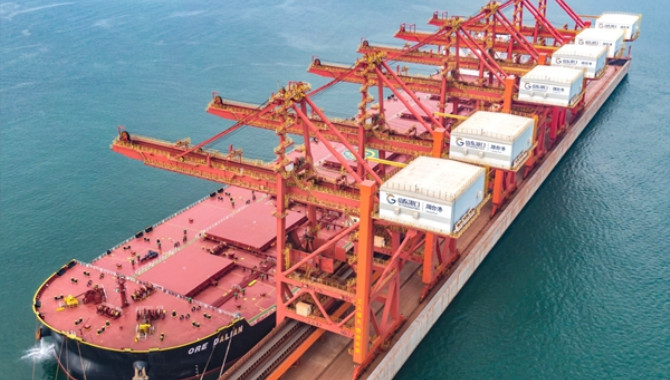 The "ORE DALIAN" ship docks at Yantai Port in East China's Shandong province.
Yantai Port in East China's Shandong province set a new world record in unloading efficiency after unloading an average of 12,438 tons of iron ore per hour from a single ship.
A total of 385,575 tons of iron ore on the "ORE DALIAN" ship that docked at Yantai Port on Aug 17 was unloaded in 31 hours between 8 pm on Aug 17 and 3 am on Aug 20.
The 400,000-deadweight-tonne ship is a Valemax ship, part of a fleet of very large ore carriers operated by Brazilian mining company Vale. The captain of the ship sent his congratulations to Yantai Port when he heard about the accomplishment.
Yantai Port was officially approved to handle 400,000-deadweight-tonne ships in June this year, greatly increasing its handling capacity and opening up a new logistics channel with the lowest cost and highest efficiency for the supply of raw materials for the Chinese steel industry.
In the unloading process, Yantai Port took full advantage of its automated terminal facilities and used six 65T ship unloaders, allowing it to achieve record efficiency.
The unloading operations of 400,000-deadweight-tonne ships have now entered the normal operation stage at Yantai Port. With the help of the integrated development platform of Shandong Port Group, Yantai Port plans to improve its comprehensive service guarantee system, give full play to the advantages of natural deep water channels, fast loading and unloading efficiency and efficient logistics services to build an iron ore unloading brand.
The port is also striving to build itself into an iron ore logistics center that serves the coast of Bohai Bay and Northeast Asia to further optimize the business layout of Shandong Port Group and accelerate the construction of a world-class marine port.
Source:Chinadaily