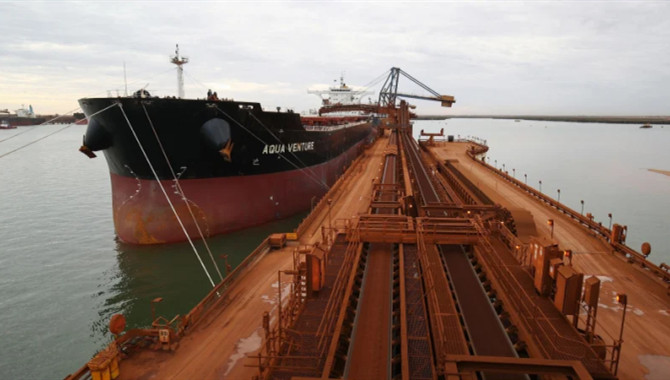 Shipments of the steelmaking commodity iron ore, Australia’s most lucrative export, will face new customs procedures on arrival in China under changes industry insiders say will streamline quality checks but could also be used to single out Australian product if trade tensions escalate.
China’s customs authorities have released new rules coming into force on June 1 that officials would conduct quality inspections for iron ore shipments at the request of the buyer. They replace the existing regime that requires the mandatory inspection of a random selection of vessels.
“[Officials] will be selectively testing for impurities in iron ore,” UBS mining analyst Glyn Lawcock said. “Australian iron ore is very good quality, we’d be surprised if it fails the test for quality. But it means things could take a little bit longer than usual if your boat is selected.”
Major miners on Thursday said they were positive about the changes, which apply to all shipments not just those carrying Australian iron ore, as they could also speed up trade flows because fewer batches might ultimately get inspected. Mining insiders said they had been first told about the proposed reforms in October 2019.
But the announcement, which comes days after China announced stiff new tariffs on Australian barley, is also being seen by some market insiders as as a “subtle message” to Australia, which supplies more than 60 per cent of China’s iron ore as the world’s largest iron ore producer. Diplomatic tensions have been rising between Beijing and Canberra since the Morrison government started seeking a global inquiry into the origins of the coronavirus pandemic.
“Everything has a purpose,” Mr Lawcock said. “This is trade negotiation, and each side is going to send messages.”
Chinese state-run media this week warned the trade friction between the two countries could spill over into the iron ore trade, quoting Yu Lei, a chief research fellow at Liaocheng University, who called the customs reforms an “implicit warning” “It is associated with how Australia has acted, and a general decline in demand for steel on the global level,” he is quoted as saying in the Global Times.
Federal Trade Minister Simon Birmingham said Australia remained committed to the “smooth facilitation” of mutually beneficial trade relations between Australia and China,
“We welcome any improvements in administrative arrangements that could streamline the customs clearance of iron ore imports,” he said.
“Such easing of administrative barriers and costs would be a positive example of the further opening of Chinese markets that President Xi has previously committed to, as well as a reform that can help with global economic recovery.”
The Minerals Council of Australia, representing the nation’s biggest miners, said the streamlining of iron ore testing was a “positive outcome” for Australian miners such as BHP, Rio Tinto and Fortescue, which suppled the bulk of China’s iron ore demand.
“These reforms will enhance this valued business partnership,” Minerals Council chief executive Tania Constable said.
“Australia’s iron ore miners have been the leading suppliers to China’s steel industry this year and supported its post-COVID economic recovery.”
Australia’s relations with China have been under strain since the Morrison government began seeking an inquiry into the coronavirus outbreak’s origins. China, which has already banned beef from four Australian abattoirs, has announced an 80 per cent tariff on Australian barley and there have been suggestions in Chinese state media in the past week the friction could spill over into the trade of Australia’s most lucrative export, iron ore.
However, curtailed production elsewhere in the world due to rising COVID-19 outbreaks and strong demand from Chinese steelmakers have quelled market concerns, with the iron ore price surging 10 per cent since May 1. boosting the fortunes of major Australian miners including BHP, Rio Tinto and Fortescue Metals Group .
Industry analysts said iron ore output in Brazil, the biggest supplier outside of Australia, remained weak amid rising coronavirus infections, and the global seaborne iron ore market was expected to remain tight, meaning the Chinese government would struggle to substitute Australian iron ore if it wanted to.
Source:Sydney Morning Herald