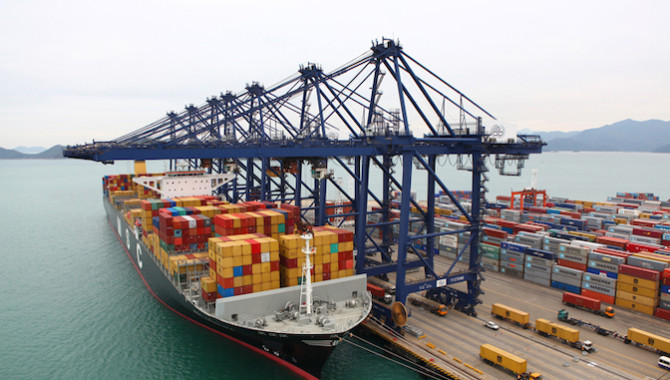 New pilotage charges for container vessels transiting Mirs Bay on their way to Yantian International Container Terminal in Shenzhen, which have been introduced from 1 January has been seen as a further blow to the Port of Hong Kong.
Carriers calling at YICT are now subject to a pilotage charge of HK$34,968 – three times the cost of standard pilotage charges.
Roberto Gianetta, executive director of the Hong Kong Liner Shipping Association told JOC.com’s Keith Wallis, “If costs at Shenzhen become too expensive say, because of the new double-pilotage requirement, carriers will skip Yantian altogether,” Mr Giannetta said. “If or once that happens, ships are not going to go to Hong Kong instead. Hong Kong is not a ‘must call’ port. Carriers will just skip both ports. So, by discouraging business to Yantian, the Hong Kong government is also discouraging business to Hong Kong.”
The Marine Department maintains that pilotage for vessels transiting Mirs Bay has become necessary to ensure safe navigation after a marked increase in containerships navigating through Mirs Bay in and out of YICT where there are many LNG, petroleum and oil terminals in Shenzhen that are serviced by a large number of tankers.
The decision to introduce pilotage services follows around four years of wrangling between carriers and the Marine Department. But the carriers represented by HKLSA remain deeply discontented particularly due to the operational impact on carriers due to the Hong Kong pilot pick-up/drop not being coordinated with the Shenzhen pilot pick-up/drop off.
“This is senseless and irresponsible on the part of respective Hong Kong and Shenzhen governments that ocean-going vessels need to face such operational inefficiencies and cost burden, particularly when alternative solutions could have been pursued in the past two and a half years,” Mr Giannetta added.
The HKLSA has approached the Marine Department requesting that the pilotage requirements at Mirs Bay be temporarily suspended until the respective pilotage services are fully aligned or until cross-boundary mutual recognition of pilot certification can be introduced and thus pilotage can be provided along the full route by one pilot.
Source:hongkongmaritimehub