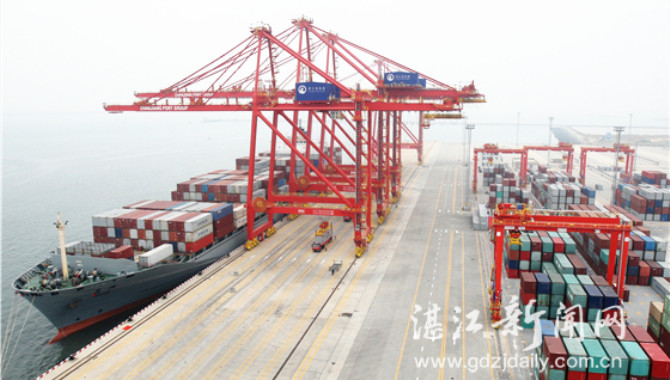 According to the Ministry of Commerce, ASEAN has become China's second largest trading partner in the first half of the year. In the past six months, the China-ASEAN import and export trade volume reached $291.85 billion, a year-on-year increase of 4.2 percent.
The development plan unveiled by the National Development and Reform Commission in August has provided solid development and policy guidance support for Zhanjiang's integration into the construction of the Western Land-Sea Trade Corridor.
Since 2013, ASEAN has replaced the United States as Zhanjiang's largest export market. At present, Zhanjiang maintains bilateral trade relations with all 10 ASEAN countries, among which Malaysia, Thailand, and Singapore are its top three trading partners. Private and foreign-funded enterprises have become the main force for Zhanjiang's import and export trade with ASEAN.
In April 2016, Zhanjiang was officially approved to set up a designated port for fruits entering the country, which offered a convenient channel for the ASEAN fruit trade in the southwestern part of China.
To date, Zhanjiang has formed stable connections with ASEAN countries in the fruit and aquatic products industries. The trade with ASEAN countries has become an important export business for Lianjiang's private small household appliance industry cluster. In addition, due to the strong demand for hardware and chemical raw materials from ASEAN countries, Zhanjiang is now promoting the construction and production of its steel and petrochemical industries, which will further bolster economic cooperation between the two sides.
Source:chinadaily