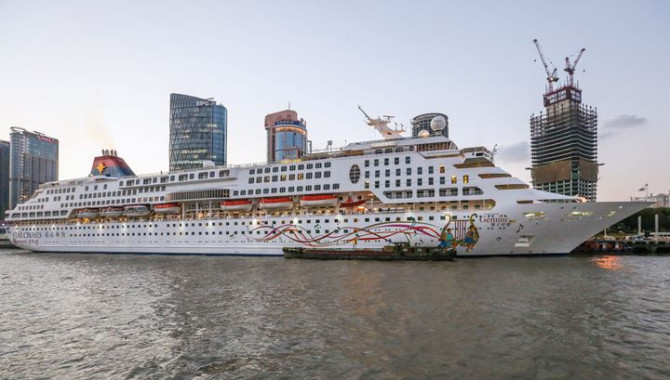 Shanghai is going to develop its Wusongkou Cruise Port into the world's third largest in terms of passenger trips and form an industrial chain worth 100 billion yuan ($14.08 billion) in the city's northern Baoshan district, officials said.
China State Shipbuilding Corporation (CSSC), one of the two largest shipbuilding conglomerates in China, plans to spend RMB 50 bln (USD 7 bln) on building a 2 km sq cruise ship industrial park in Baoshan District, Shanghai.
Recently, China CSSC Cruise Technology Development (CCTD) and Baoshan district government signed a cooperation agreement, which states that Baoshan will fully give the support of the development of CSSC, establish an investment platform, jointly develop Shanghai CSSC International Cruise Industry Park, and build a global influential cruise headquarters based in Shanghai.
It is estimated that by 2030, CSSC will own and operate a Chinese-funded fleet consisting of 8 to 10 cruise ships for different brands that aims at the Asia-Pacific market.
Shanghai boasts of the world’s fourth-largest cruise liner port and the largest in Asia. It has received more than 2,000 international cruise ships and over 13 million tourists, which makes it possible to build Shanghai into the world’s largest cruise liner center.
China’s cruise tourism market has great potential, with an average annual growth rate of more than 40% in the past few years, ranking second in the world in 2018. It is estimated that the annual number of cruise passengers in China will exceed 14 million in 2035 and 30 million by 2050. The domestic market alone will need hundreds of large cruise ships.
At present, the global large cruise ship market is almost completely monopolized by European shipyards, with an annual supply capacity of only 7 ships and demand of about 15 ships, resulting in a serious shortage. The establishment of this industrial park will be likely to alleviate this situation.
Source:China Knowledge