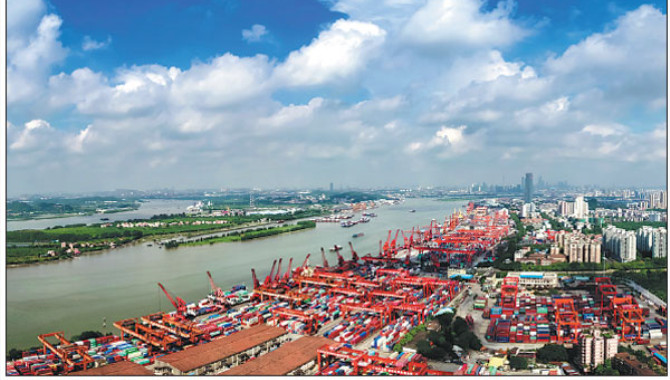 Huangpu Port in Guangzhou, capital of Guangdong province, is sparing no efort in developing emerging industries as part of efforts for it to become a modern innovation zone in the Guangdong-Hong Kong-Macao Greater Bay Area, and a new trade center serving Hong Kong and Macao.
The new industries that the port strives to develop include high-end shipping service, cross-border e-commerce, intelligent and digital trade, and cultural and creative sectors.
Under the administration of the Guangzhou Development District, Huangpu Port plans to develop the last 10 kilometers of coastline on the Pearl River for integrated industries and functions, according to the administrative committee of the Huangpu Port economic zone.
Sinotrans, one of the largest operators of integrated logistics in China, has established its regional headquarters for South China at Huangpu Port on the back of its optimism toward the port's geographical advantages and development prospects.
The regional headquarters overseas operations covering Guangdong, Yunnan, Fujian, Hunan, Guizhou and Hainan provinces, as well as the Guangxi Zhuang autonomous region.
According to a senior executive at the South China regional headquarters, Sinotrans is committed to taking full advantage of the railway network in several provinces and regions, so as to develop its business in the countries and regions involved in the Belt and Road Initiative.
Relying on the favorable location and advanced support facilities at Huangpu Port, Sinotrans operates freight trains to Central Europe and Central Asia, offering twice-a-week and once or twice-a-week services, respectively.
Together with its other businesses, the South China regional headquarters has total assets valued at 10 billion yuan ($1.46 billion) and annual income of 10 billion yuan.
Huangpu Port is also striving to become a hub for innovative modes of trade based on the solid industrial development and business climate of the Guangzhou Development District, according to Zhou Yawei, secretary of the Party Working Committee of the Guangzhou Development District.
The district has developed well in high-end manufacturing and high-end services, which is favorable for the port to develop a new business model of manufacturing and trade, he said.
It has also been approved for the development of the first pilot area for business environment reform and innovation in Guangdong province. The pilot area is devoted to providing enterprises with more efficient services and a more convenient business environment.
Guangdong Top Ideal SCM Technology is one of the many innovative companies that have settled and are now thriving at Huangpu Port.
The integrated service provider has developed a global business scope covering six major sectors: cross-border e-commerce, logistics supply chain, international trade, information services, port warehousing, as well as supply chain finance.
The company utilizes blockchain technology to add digital identities to cargo, allowing it to track and trace goods at every step of transportation. Currently, more than 1,500 enterprises with registered capital exceeding 5 million yuan have settled in the Huangpu Port Economic Zone, combining for a total registered capital surpassing 18.6 billion yuan.
Source:chinadaily