Companies must intelligently invest in AI 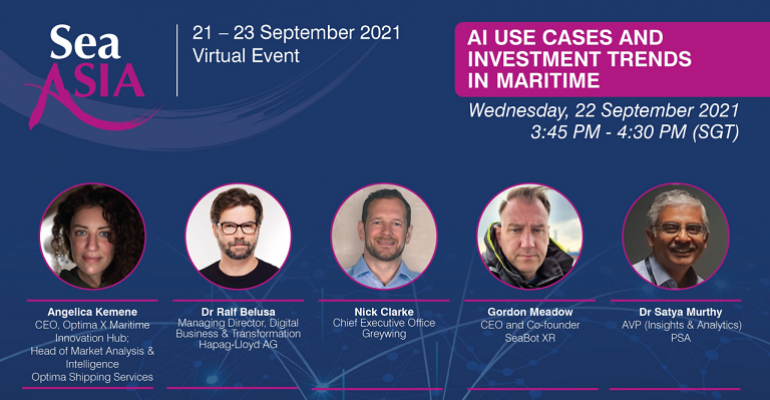 It is clear from the panelists at the Sea Asia 2021 virtual conference that there will be increasing use of artificial intelligence (AI) in the maritime industry and in order to prepare for this, companies need to ensure their decision makers are knowledgeable and influential enough to make the right investments.
The stage was set when Hapag-Lloyd Managing Director for Digital Business and Transformation Ralf Belusa quipped that not investing in AI and big data analytics makes companies akin to being like a deer on a highway.
Referring to what he called the network effect, Belusa said companies should ideally use an AI learning loop to continuously reinvent their businesses. Decisions on where to invest to unlock business value should be based on data analysis and AI, he said, adding that this would help to connect the dots between enablers and the company's data processes.
Highlighting the example of Covid's spread in what he called the human lag in understanding exponential functions, Greywing CEO Nick Clarke said the lack of understanding of technology and how data can be used is common in the maritime industry at present.
Greywing started as a platform to automate maritime operations meant originally to help mitigate the risks of piracy on vessels, but pivoted its business model last year to facilitating crew change in the pandemic. Clarke said in the process of dealing with the crisis he was amazed at how much data is available and also showed that the industry is quite a few steps away from being able to effectively make use of it.
He said the problem often starts with maritime companies who still see technology as being separate from their core business. This results in them not having a dedicated person who is knowledgeable and empowered enough to make decisions on technology investments.
Other panelists however were quick to show that their organisations were well on the road to technology adoption. For example, PSA AVP (Insight & Analytics) Satya Murthy said the port operator had a very broad view of AI to use technology to help human operations.
AI is being used to enhance the safety, security and efficiency of port operations. This ranges from using video analytics to improve lashing operations to the use of data analysis for better asset utilisation as well as to improve its environmental footprint.
Expanding on this, CEO and Co-Founder of Seabot XR Gordon Meadow said the adoption of AI is all about the partnership between the technology and people. "AI should focus on enhancing human intelligence and improving decision making," he suggested.
While the use of technologies such as remote surveying and remote monitoring is increasing in the oil and gas industry, Meadow sees the next major use of AI as being in decision support capability. He estimates that by 2050 more than 50% of functions will be mimicked by automation.
Clarke believed that to encourage greater use of AI, the key is to automate information as much as possible. In doing so it will often be found that as some functions are initially automated, more ways to use technology to further increase automation will present themselves.
Murthy concluded that for the use of AI to progress, there needs to be more data sharing across the maritime supply chain. "Human power coupled with technology is the way to move forward," he said.