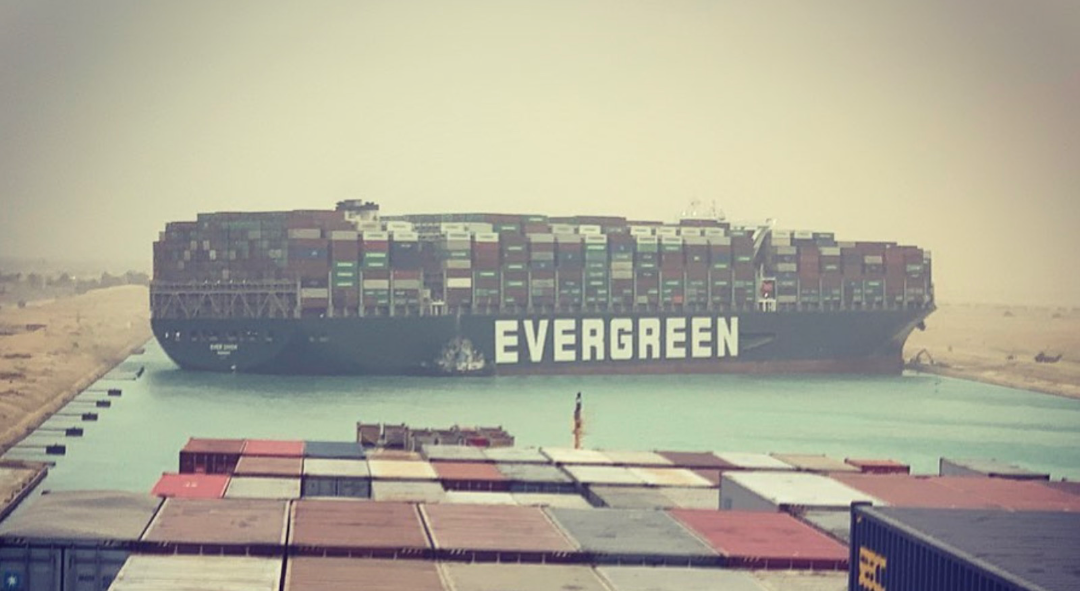 The ultra large container ship Ever Given has a carrying capacity of 20,000 twenty-foot equivalent units (TEUs) and was en route from Yantian, China, to the Port of Rotterdam in the Netherlands when it reportedly ran aground Tuesday morning. Some 18 hours later, the Evergreen ship had not budged.
According to various reports, every tug available in Egypt was working to get the 2018-built Ever Given free. Images widely circulated on Twitter and taken from a container ship behind the Ever Given show what looks like a tiny excavator compared to the massive cargo-laden vessel.
From circulated images, it appears the Ever Given is stable and there have been no reports of damage to the container ship or its cargo. Taiwan-headquartered Evergreen Marine Corp. has not issued a statement.

The Ever Given reportedly was fifth in a northbound convoy when it somehow got turned sideways and stuck. Fifteen ships were said to have been behind the Ever Given at the time and were prevented from proceeding. Because of the Ever Given's position, southbound traffic also was blocked by the ultra large container ship.

According to tweets, tankers and container ships were stacking up at both ends of the canal as well as in Great Bitter Lake in Egypt.
According to the World Shipping Council, the average transit time through the 119-mile Suez Canal is 14 hours. Roughly 50 ships transit the canal each day.