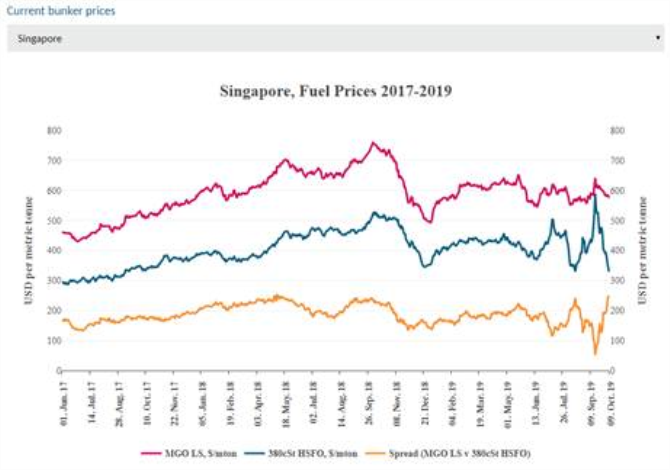 BIMCO has developed a monitoring service for bunker prices, with data provided by MABUX, which is now available to all BIMCO members.
The new interactive graphs allow price fluctuations in the major bunkering hubs of Singapore and Rotterdam to be tracked. They will show the bunker prices for 380cST HSFO (high sulphur fuel oil) and MGO LS (marine gas oil low sulfur), both in USD per metric ton, as well as the spread between the two fuel types, with data available since June 2017. The spread between the fuel types is of keen interest to the shipping industry as the 2020 Sulfur cap looms ever closer.
380cST HSFO is chosen over 180cST HSFO as the latter is becoming increasingly less popular among ship-owners and has only limited availability in both Singapore and Rotterdam. MGO LS is chosen over VLSFO as there is currently neither a consistent demand nor a standard product of VLSFO (very low sulphur fuel oil) and its price is therefore not yet being published on a regular basis. As January 1, 2020 approaches, demand is likely to grow as VLSFO will be the cheapest compliant fuel for ships without an exhaust gas scrubber. VLSFO will be added to the graphs once reliable price information on a standard product can be obtained.
The price difference between high and low sulfur fuel will be the determinant factor as to whether an investment in scrubbers will pay off for shipowners. Scrubbers allow for the continued use of the cheaper HSFO, whereas those who have opted not to install one will have to rely on a more expensive low-sulfur fuel. With the new tools enabled by BIMCO, members can now follow the bunker prices and spreads as they unfold in real time and track the payback time for a scrubber investment.
“All stakeholders in the shipping industry will want to keep a close eye on the development of high sulfur and low-sulfur fuel prices as the deadline for compliance approaches. With 83 days left until the new regulation comes into force, the days of speculation about the fuel spread are drawing to a close and shipowners must square up to the added cost,” says Peter Sand, BIMCO’s Chief Shipping Analyst.
Source:BIMCO