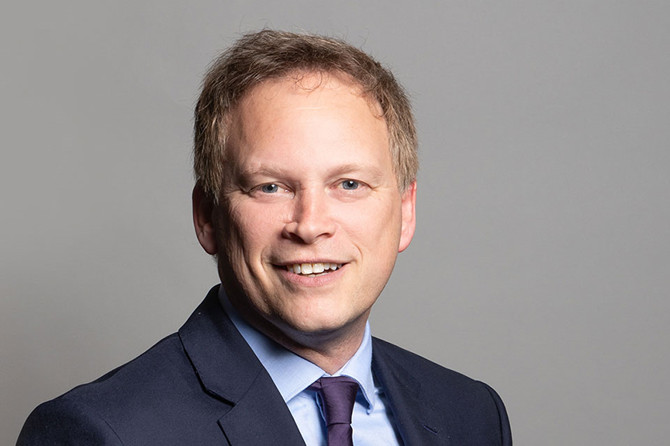 Transport Secretary Grant Shapps calls for other countries to support a target of absolute zero for international shipping emissions by 2050.
Introduction
Good morning everyone. And a very warm welcome to HMS Albion, one of the Royal Navy's most versatile vessels, known as the 'Swiss Army knife' of the British fleet.
And today, continuing that tradition of adaptability, HMS Albion has become a magnificent backdrop for this important event to promote and celebrate innovators who are helping the shipping industry move towards a zero carbon future.
So let me thank Captain Simon Kelly and his crew – together with the Department for International Trade and Ministry of Defence – for hosting us, as part of the Net Zero Hub.

It's a privilege to be on board.
Context: shipping and CO2
Within a transport industry that currently produces around one-fifth of total worldwide CO2 emissions, maritime has had a pretty easy ride.
Whilst road transport and aviation, 2 very visible forms of travel that have become emblematic of our reliance on fossil fuels, are most often targeted by international climate change protestors, global shipping has tended to be largely ignored, despite the fact that it emits more greenhouse gases than aviation. And, like air travel, it is actually increasing its contribution to climate change.
In fact, the CO2 that shipping produces annually equates to 3% of all carbon dioxide emitted by human activity worldwide. And in the UK, domestic shipping alone produces more greenhouse gases than rail and buses combined.
The fuel used for shipping continues to be some of the most polluting fuels across all transport modes and, this, despite regulatory intervention limiting its sulphur content.
And when you consider that maritime trade is expected to double over the next decade, you start to understand the scale of the environmental challenge this industry faces.
Action is needed now – vessels' lifespan means that zero emission ships should start being deployed by 2025 if we stand a chance to achieve our 2050 target.
2050 target
But frankly, too little progress has been made in recent years.
Only last month, the Intergovernmental Panel for Climate Change became the latest expert organisation to stress that significant and immediate cuts in greenhouse gas emissions are needed to avoid the dire impacts that global warming would inflict on our environment.
Clearly, urgent and radical action is needed to put global maritime on a sustainable footing.
And that means it's up to forward-thinking nations, working through international organisations, to focus minds and place the industry on an irreversible course towards decarbonisation.
That is why we've announced at the greenest ever London International Shipping Week and just 2 months before we welcome the world to the COP26 conference in Glasgow that the UK will lead the clarion call to encourage other countries in supporting a target of absolute zero for international shipping emissions by 2050.
There is no doubt that this target, which would need to be agreed through the International Maritime Organization, requires a massive commitment by shipping worldwide to raise its ambitions.
And yet, as visitors to London have seen this week, this industry is bursting with innovation.
Pioneering people and enterprises who are already creating the green maritime technologies and businesses of the future. Not just to play their part in tackling the climate emergency, but to compete and grow our green economy too. To create thousands of jobs in emerging maritime technologies and to grasp the huge opportunities that will open up in the market for cleaner, more modern shipping.
Technological revolution
We're already getting a taste of how vessel designs will change. They will be the most fuel-efficient that this industry has built since the transition from sail to steam power.
Redesigned from the keel up, they'll feature optimised hull forms, new rudder and propellor arrangements, new foiling systems to reduce drag and improved wind assistance through sails and rotors.
For some slower ships carrying bulk products, things may go full circle – with steam giving way to sail.
Innovation will spread quickly through the market. Even in the short term, we expect most ships will be between 35% and 45% more efficient by the 2030s, and perhaps at least 50% more efficient by the end of that decade.
Whilst by the 2040s, we expect to see the widespread introduction of ships featuring carbon-free propulsion, for example, using hydrogen, ammonia or high-density batteries.

Clean maritime competition
Not only will zero carbon shipping technologies be ready well in advance of 2050, they're already being tested in many countries, including here in the UK.
That's why I've just challenged the industry to have zero emission vessels entering commercial service in the UK by 2025 – such as on cross-channel routes.
It's the role of government to spark the creativity of our brilliant maritime industry, to support and incentivise the most pioneering minds and companies around the UK, from the smallest start-ups to the largest corporations, to develop a new industrial legacy for the future and generate many thousands of skilled jobs within the sector.
This was the thinking behind our Clean Maritime Demonstration Competition. The biggest such competition in the department's history.
And launched as part of the Prime Minister's Ten point plan for a green industrial revolution.
We didn't expect it to be quite as successful as it proved, attracting applications from well over 300 organisations.
But this week we've been able to announce 55 winners, feasibility studies and technology trials all over the country, who will share a total investment – with match funding – of over £33 million, which really illustrates the diverse strength of the maritime sector across the country.
Every one of the schemes will, in future, progress to real-world demonstrations helping the government accelerate the transition to net zero in partnership with UK industry.

They include:
·a green, hydrogen-powered submarine programme to build vessels that will collect toxic microplastics from the ocean while transporting cargo between Glasgow and Belfast
·an electric chargepoint connected directly to an offshore wind turbine allowing boats to charge using 100% renewable energy from the turbine
·a project involving the University of Kent in the south east exploring the electrification of propulsion vessels in the Short Straits ferry fleet
·in the Midlands, an initiative involving Westfield Sports Cars, testing a new high-performance energy storage system, which could be applied to both road vehicles and vessels
·and in Aberdeen, a project testing the design of hydrogen powered vessels and ways to create green hydrogen directly from offshore wind turbines
There's no doubt, the competition to create the breakthrough technologies of tomorrow is hotting up. And we're confident the successful delivery of these fantastic technologies will play a major part in helping the UK achieve its net zero goals.
Other UK measures
And this is just the start. As we announced in the recent launch of the UK Transport decarbonisation plan, we're going to consult on a potential phase out date for the sale of new, polluting domestic vessels and fuels, and ultimately set out a course to fully decarbonise UK maritime, step by step, from 2030.
We're also exploring the set-up of a UK Shipping Office for Reducing Emissions – a dedicated unit within the Department for Transport focused on decarbonising the maritime sector.

And earlier today, also on board the HMS Albion, the government launched a green shipbuilding campaign. As a maritime nation with a rich history, we are proud to be at the forefront of the greener era for maritime, charting an international course for the future of clean shipping.
In all these markets, the UK is well placed to spearhead innovation. We have so much experience in naval architecture, shipbuilding and marine equipment, skills that have been passed down from generation to generation and that are now being adapted for a new era of maritime growth.
Taking action now will help us lead the charge on decarbonisation, reducing emissions and shaping the landscape for what clean shipping and trade will look like for future generations.
Conclusion
It's fitting that I can deliver such a hopeful message about the future of shipping here in Greenwich, a place with such a rich maritime history, in a city which has looked outward for growth ever since the Port of London was created by the Romans 2,000 years ago.
We're proud of our past, but we have our sights firmly set on the future. A future that will be driven by globalisation, by competition and profit, just as it always has been.
But that now must be joined by a new imperative, inspired by our shared determination to protect the planet we live on. Yes, shipping must grow, to meet the needs of the global economy. But it must grow responsibly. Within a framework of carbon-cutting until there's no more carbon to cut.
The challenge could not be greater. But with the help of our Clean Maritime Competition winners, we will work with a laser focus at home and globally, with our friends and partners through the International Maritime Organization, so that together we can make our vision for zero emission shipping a reality.
Thank you.