Shipping must collaborate on climate change and crew changes 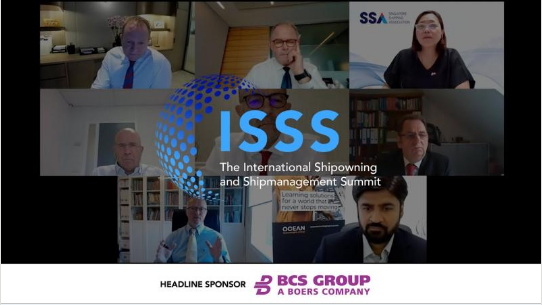 All stakeholders in shipping need to collaborate, co-operate and communicate better to tackle the upcoming climate change crisis
Shipmanagers and shipping associations called for a single organisation to be created to provide one voice to lobby governments on environmental issues. This was one of the key conclusions from the International Shipowning and Shipmanagement Summit, part of London International Shipping Week 2021.
Intermanager president and Columbia Shipmanagement president Mark O'Neil said an influential organisation needs to work alongside IMO. This organisation would be supported by other industry bodies to deliver one message to politicians when global issues are debated, such as methods to cut greenhouse gas emissions.
"We need a committee to provide information to governments before they make decisions," Mr O'Neil said. "This would be a single point of contact with one voice for shipping. Presidency of this body would rotate through all of the associations, so there would be no rivalry."
He does not think IMO is in the best position to provide that message, as it is too focused on regulation. Therefore, a new all-encompassing organisation should be created to highlight the technology and environmental achievements shipping has made and could achieve in the future. Mr O'Neil said this organisation needs the backing of other stakeholders such as brokers, traders and charterers.
International Chamber of Shipping secretary general Guy Platten said this debate and future solutions must also include ports and other stakeholders. He said ports need to invest in infrastructure to provide greener energy to ships as the burden should not solely be on shipping companies.
Intercargo chairman Dimitri Fafalios said shipping needs to work with other transport industries, including rail and road haulage and across the supply chain to deliver methods for cutting greenhouse gas emissions. "Decarbonisation and safety can work better with other transport modes," he said. "We need to collaborate with governments to show the relevance of shipping to global trade."
Thome Group chief executive Olav Nortun agreed shipping must "reach out to wider networks" to tackle a common issue such as global climate change. He also thinks lobbying should be more focused. "We need to talk to the right part of these organisations and open up communications to governments," he said.
Intertanko marine director Phil Belcher said multiple voices should be heard on technical issues as he feels specialised sectors, such as chemical carriers, could have implementation challenges in future regulation.
"At IMO, having multiple voices really helps on technical issues such as ballast water treatment," said Mr Belcher. "We need better collaboration, co-operation and communications." He said shipping has already resolved key issues, such as improving security in the Gulf of Guinea, through better collaboration with governments.
Shipmanagement experts on the panel said shipping can use expertise gained collaborating over Covid-19 pandemic issues, particularly the crew-change crisis, as a springboard for tackling climate change.
V.Group chief executive of shipmanagement Bjoern Sprotte said shipping had collaborated as an industry to tackle Covid challenges and found "new ways to be faster and more connected".
But there are still crew-change issues to tackle. "We cannot rely on governments to take the initiative," he said. "We need to demonstrate how collaboration will keep global trade going."
Singapore Shipping Association president Caroline Yang said seafarers should be considered frontline key workers for vaccinations and crew changes. But there remain issues and states are blocking crew from leaving ships and travelling between nations. "We should have done more on crew changes and vaccinations," she said, "as actions mean more than words."
Anglo-Eastern Univan Group chief executive Bjørn Højgaard said changing crew east of Suez was still difficult despite collaboration. "People on board are still suffering," he said. "Seafarers need four weeks of quarantine, they get no shore lead and do not know when they can go home."
We said ports and states have a "poor attitude" when it comes to crew changes. "There are stumbling blocks in ports, as nations stop crew changes," said Mr Højgaard. "They want ships and cargo, but not crew changes in ports.”