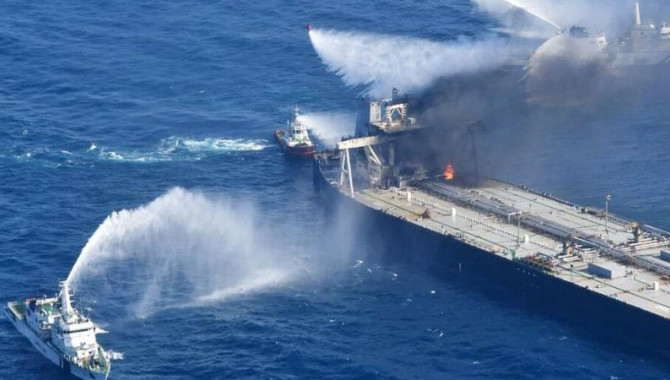 On Thursday 3 September, the Very Large Crude Carrier (VLCC), transporting two million barrels of crude oil from Kuwait to Paradip Port (India), ran into trouble because of an explosion and a fire in the engine room. The location of the incident was approximately thirty nautical miles from the east coast of Sri Lanka. With the fire going out of control, the majority of the crew was evacuated by the Sri Lanka Navy. Unfortunately, one crew member passed away. Our salvage colleagues were awarded the contract last week, and a multi-location mobilization commenced. General Manager Asia Pacific Hemant Phul provides us with an update.

Mobilisation
“The Sri Lankan Navy and Indian Coast Guard vessels were mobilized to the site by the Marine Rescue Command Centre (MRCC) in Sri Lanka. Two harbor/port tugs with fire-fighting capabilities were mobilized from Sri Lanka. Two larger tugs with fire-fighting and towing capabilities were activated to proceed to the casualty site and commence with boundary cooling and fire-fighting activities. A team of seventeen salvage experts were mobilized from the Netherlands, after clearing COVID-19 protocols and obtaining landing rights in Sri Lanka. From Singapore, a tug departed with a second salvage team and equipment. The BOKA Expedition left from Mauritius to Sri Lanka and a tugboat is also on its way from DG Shipping in India. “

Explosion
“The operation’s primary objective was to bring the fire under control, while ensuring that the cargo of crude oil is not affected by the heat and the fire in the engine room. The loss of cargo to the environment could be a major catastrophe. Momentary success came when the five was believed to be out on 6 September. However, on 7 September, a loud explosion started another fire in the engine room, and the fire-fighting works continued. During the entire operation there was a strong emphasis on ensuring cargo tanks would not heat up, and boundary cooling continued throughout. One of the tugs was connected to the casualty to keep it away from the Sri Lanka coastline.”
Inspection
“With the continued efforts of all parties involved the fire is believed to be extinguished today. Our teams, supported by the marine chemist and five advisors, have boarded the casualty for a first inspection. What we will do next is still to be determined by the client and the authorities. We expect that the water in the engine room and the complete cargo will be transferred to other vessels for further transport, delivery and (water) treatment. For now, our teams on-site continue to maintain a tight vigil on the condition of the vessel and coordinate with all stakeholders to manage the risk.”