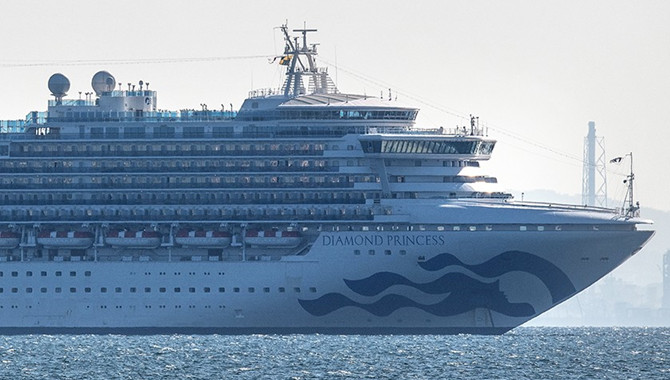 Forty-one new cases of coronavirus have been found aboard the cruise ship Diamond Princess in Yokohama, Japanese authorities said.
The 41 are in addition to 20 previous cases detected in preceding days.
Princess Cruises said in a statement that it “has been notified by the Japanese Ministry of Health that an additional 41 people from the targeted screening samples onboard Diamond Princess have tested positive for coronavirus.”
Besides the eight Americans, those who tested positive included 21 Japanese, five Canadians, five Australians, one person from the U. K. and one Argentinian.
The Japanese Ministry of Health has said this is the last group of people from the ship to be tested, and that the quarantine will end Feb. 19 “unless there are any unforeseen developments,” Princess said.
Princess said that “we expect that local public health authorities will be disembarking these guests today for transport to local hospitals immediately.”
About 3,700 passengers and crew are on the ship, which is quarantined.
Citing Japan’s Ministry of Health, Labor and Welfare, Kyodo News reported that the patients would be brought ashore for treatment in Tokyo, Saitama, Chiba, Kanagawa and Shizuoka.
Also citing the Ministry of Health, Labor and Welfare, the Japanese network TV Asahi reported that those 61 positive tests for coronavirus came from among 273 passengers and crew tested.
Word of those results came as this ship entered a third day in quarantine at Yokohama.
Princess Cruises officials did tweet earlier that passengers “in inside and non-balcony staterooms are now permitted to get fresh air on a rotating basis, as directed by Public Health authorities” -- a notable improvement, especially for those previously confined to windowless rooms. But later came further signs, including many through passenger posts on social media, that the confinement is wearing on people.
The ship, carrying 2,666 passengers and 1,045 crew members, is expected remain where it is for two weeks. The ship’s passengers began their journey Jan. 20 at Yokohama. Their cruise was to have ended Feb. 4.
While busying themselves with crossword puzzles and in-cabin movies passengers daydreamed of humidifiers and other comforts.
For the remainder of the quarantine time, Princess said “guests will continue to be provided complimentary internet and telephone service to stay in contact with their family and loved ones. In addition, we have added additional live TV channels and a large selection of in-room movies available in multiple languages. The cruise activities staff is packaging games, puzzles and trivia and delivering them to guest staterooms.”
The 20 people from the ship who earlire tested positive for coronavirus, who have already been brought ashore for medical treatment, include seven passengers from Japan, three from Hong Kong, three from the U.S., two from Australia, two from Canada, one from New Zealand, one from Taiwan and one crew member from the Philippines.
About half the Diamond Princess’s passengers are from Japan and the rest from a variety of countries, Princess said. There are 428 Americans aboard, said CNN, quoting the U.S. Embassy.
“We just don’t feel like we’re safe,” U.S. passenger Milena Basso said in a video aired on CNN. “Donald Trump, save us!”
Meanwhile, contagion-related dramas continued to play out on other cruise ships, as well.
The World Dream cruise ship, operated by Dream Cruises, remained docked in Hong Kong Thursday. The South China Morning Post reported its roughly 1,800 passengers and 1,800 crew remained confined to the ship, which was turned away from Taiwan after the revelation that it had carried at least eight infected passenger between Hong Kong and Vietnam in late January.
Hong Kong authorities said Wednesday that 33 crew members had reported symptoms of respiratory tract infections, of whom 32 tested negative for coronavirus with one result still pending.
The Westerdam, a Holland America ship that called at Hong Kong Feb. 1 and was scheduled to call at Yokohama Feb. 15, has been denied permission to dock anywhere in Japan, the Miami Herald and Kyodo News reported.
Cruise Week reported that several ships have been rebuffed from ports in Japan, the Philippines, Taiwan and perhaps elsewhere. “For instance,” Cruise Week noted, “Seabourn Ovation did not make a scheduled call in Manila on 2/6 and other areas in the Philippines, calling in Thailand instead.”
Source:Los Angeles Times