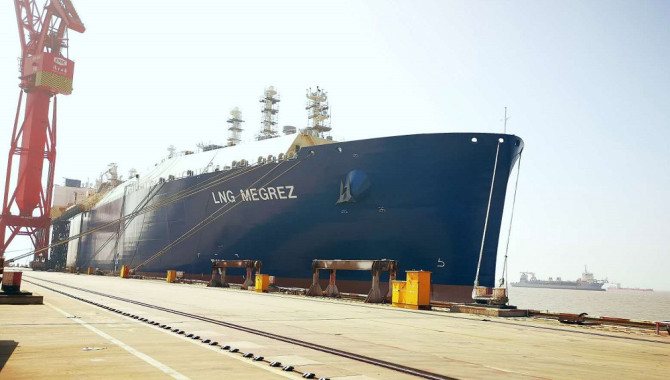 China's Hudong-Zhonghua is to deliver the fourth and final conventional Yamal LNG carrier to a joint venture consisting of compatriot Cosco Shipping and Japan’s Mitsui O.S.K. Lines.
The 174,000-cbm LNG Megrez is finalising its gas trials after it left Hudong’s Shanghai yard on September 8.
Offshore Energy understands that the owners will officially name the vessel during the second part of next month.
LNG Megrez has an overall length of 290 meters featuring two WinGD’s dual-fuel engines and GTT’s No96 membrane cargo containment system.
To remind, Hudong delivered the third vessel in this batch, LNG Phecda, last month.
The yard handed over the first carrier of the quartet, LNG Dubhe, in October 2019 followed by the second vessel, LNG Merak, in January this year.
Conventional carriers loading directly at Yamal
These Yamal carriers have not been designed to directly load chilled fuel at Novatek’s 16.5 mtpa LNG plant in the Russian Arctic.
They don’t have ice-breaking capability such as the ARC7 carriers that serve the plant in Sabetta.
The plan for them included taking transshipped LNG at European terminals, previously delivered by ice-class carriers, for onward distribution mainly to Asia.
However, shipping data shows that both LNG Dubhe and LNG Merak have in August directly loaded the fuel at the Arctic plant.
Dubhe's cargo landed at Spain’s Bilbao and its AIS data shows that is again heading to Sabetta while Merak delivered the shipment to the Dutch Gate terminal.
This move is probably related to rapid ice melting in the Russian Arctic waters which already enabled Novatek to do some firsts with its ARC7 carriers.
This includes the Russian independent producer sending the first LNG cargo eastbound via the Northern Sea Route already in May, almost two months ahead than the last year as melting sea ice opens the Arctic to navigation.
Source:LNG World News