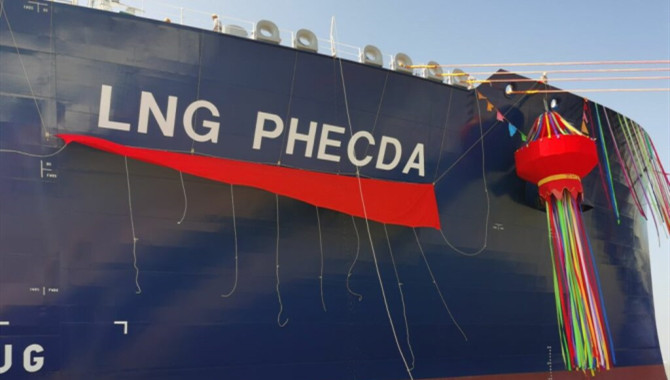 China’s Hudong-Zhonghua held on Wednesday a naming ceremony for the third Yamal LNG vessel owned by a joint venture consisting of compatriot Cosco Shipping and Japan’s Mitsui O.S.K. Lines.
The owners will take delivery of the 174,000-cbm LNG Phecda by the end of this month.
To remind, Hudong recently said the vessel wrapped up its gas trials on July 21 completing its last major test prior to its official naming ceremony.
LNG Phecda is the third in a series of four Yamal-dedicated vessels ordered by the MOL-Cosco venture at Hudong.
Each of the 290 meters long ships features WinGD dual-fuel engines and GTT’s cargo containment system.
The Yamal carriers will not directly load chilled fuel at Novatek’s 16.5 mtpa LNG plant in the Russian Arctic.
They will take transshipped LNG at European terminals, previously delivered by ice-class carriers, for onward distribution mainly to Asia.
Hudong is also finalising works on the fourth and final Yamal carrier in this batch, LNG Megrez.
This 174,000-cbm carrier completed sea trials on Monday.
The yard delivered the first carrier of the quarter, LNG Dubhe, in October 2019 followed by the second vessel, LNG Merak, earlier this year.
Source:LNG World News