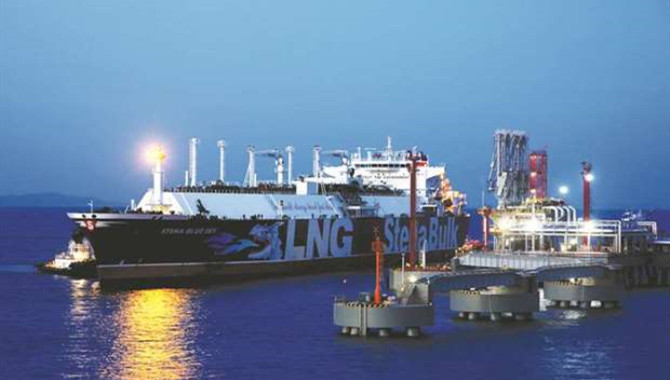 China's largest private LNG terminal operator ENN Energy Holdings could nearly triple LNG imports at its underutilized 3 million mt/year Zhoushan receiving terminal in eastern China with the startup of a new subsea natural gas pipeline that connects the facility with demand centers in Ningbo city.
The 81 km (50.3 mile)-long Yongzhou subsea natural gas pipeline resolves a major logistical bottleneck for Zhoushan LNG, which is built on an island and has been operating below capacity since it started operations in 2018 due to government’s regulations limiting the number of LNG trucks that can be sent inland.
ENN, which is also China’s largest private city gas distributor, is expected to boost LNG imports at the Zhoushan terminal to around 2 million mt/year in 2020 from 732,000 mt in 2019, according to multiple market sources. This still leaves it with another 1 million mt/year of capacity.
Zhoushan LNG imported around 720,000 mt of LNG over January-May; 400,000 mt under term contracts and 320,000 mt from the spot market, investment bank China International Capital Corp said in a client note in June.
The Yongzhou pipeline will also allow ENN to meet its long-term LNG contract obligations. The Hong Kong-listed company has 5-year to 10-year purchase agreements with France’s Total, Chevron and Australia’s Origin Energy totaling around 1.43 million mt/year, and has only been able to import a fraction of that volume to date.
ENN was said to have delayed the lifting of some contracted volumes due to the logistics issues. With the pipeline it can now take advantage of contracted LNG cargo prices falling to historically low levels in 2020, and which could become even more attractive than spot LNG prices in coming months.
The price of oil-linked contracted LNG cargoes fell to an historic low of less than $3/MMBtu in June-July due to Brent crude prices crashing below $30/b over March-May, as prices are based on the prior 3-month average. Crude has since rebounded above $40/b and spot LNG prices have risen above $3/MMBtu in the run-up to winter, Platts data showed.
YONGZHOU SUBSEA PIPELINE
Gas transmission from Zhoushan terminal to the Zhenhai district of Ningbo city in the eastern Zhejiang province, where it connects to the provincial natural gas distribution network, began on Aug. 6, network operator Zhejiang Energy said on its official WeChat platform the same day.
Zhejiang Energy said the Yongzhou pipeline, capable of transporting 8 Bcm/year of natural gas, will be the eighth gas supply source to feed the provincial gas network.
Other gas sources feeding the network are the first and second phases of state-owned PetroChina’s West-to-East pipeline, regasified LNG from state-owned CNOOC’s 3 million mt/year Ningbo LNG terminal, offshore gas from the East China Sea, pipeline gas from Sichuan province, offshore gas from the Lishui 36-1 gas field in Zhejiang and coal-bed methane gas from Xintian in Xinjiang province.
Like many of China’s coastal LNG terminals, ENN relies on trucks to supply LNG from the Zhoushan terminal to Zhenhai district, or on roll on/roll off or ro-ro ships capable of carrying 7-9 LNG trucks each, according to local market sources.
“[But] they need to obtain permits from the local government for LNG truck or ship transportation as LNG is classified as a hazardous chemical, which is strictly regulated and constrains the Zhoushan terminal’s LNG distribution volumes,” one market participant said.
Zhoushan LNG terminal’s distribution had increased to more than 200 LNG trucks, totaling around 6 Mcm/day or 4,300 mt/day, with the startup of a new sea bridge in April. Before that, the terminal could only send out around 80 LNG trucks or around 1,600 mt each day to the mainland markets from Monday to Friday.
ENN’s Yongzhou subsea pipeline is estimated to add 22 Mcm/day or 16,000 mt/day of gas transportation capacity to the Zhoushan LNG terminal, Platts calculations showed.
Zhoushan LNG started operations in October 2018, comprising two LNG storage tanks each with a capacity of 160,000 cu m, a jetty capable of berthing LNG carriers of 80,000-266,000 cu m and two re-loading docks capable of berthing LNG carriers with a capacity of 3,000-30,000 cu m.
ENN began construction of the subsea natural gas pipeline in mid-2019 and was scheduled to complete it by the end of 2019.
Overall, the growth of China’s gas pipeline network has lagged the pace of growth in the country’s gas demand, growth in LNG regasification infrastructure and even natural gas storage capacity, resulting in China becoming the largest LNG trucking market in the world.
Over 2016-2021, China’s gas storage capacity is forecast to grow by a compound annual growth rate or CAGR of 9%, gas demand by 12% CAGR — touching 310 billion cu m in 2019 — and regasification capacity by up to 16% CAGR, but pipeline networks are expected to grow by only 4% CAGR, according to a 2019 study by Goldman Sachs Global Investment Research.
Source:Platts