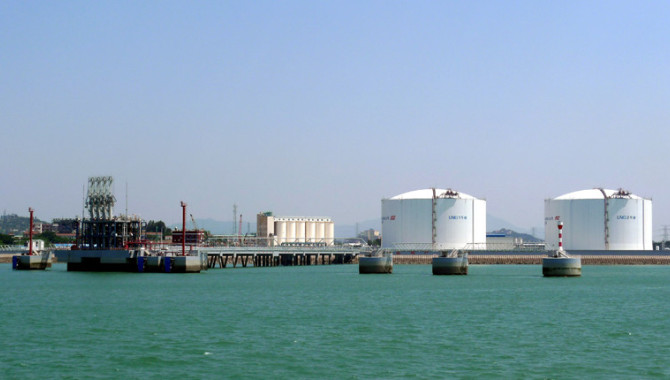 Growth in Chinese imports of liquefied natural gas (LNG) is set to slow sharply this year reflecting a slowing economy and record high coal imports, according to analysts.
Beijing since 2017 has pushed households to convert to gas or electric heating from coal and this year has set its highest yet target for conversions at 5.24 million households.
However, growth of LNG demand in China in 2019 is expected to slow to 14%-17% from 41%-42% in 2018, according to analysts from Wood Mackenzie and IHS Markit.
"The market fundamentals have weakened in 2019, where industrial demand is underperforming. The uncertainty over future industrial production growth...will impose downward pressure on gas demand," said Xueke Wang, a consultant at Wood Mackenzie in Beijing.
China bought 9.47 million cubic metres of LNG in October, its lowest intake since April and down 2.5% from a year earlier despite adding LNG terminals and storage, vessel-tracking and port data compiled by Refinitiv showed.
"The government is slowing down its coal-to-gas push and isn't enforcing it as strictly due to the economic slowdown," a source at a Chinese state-owned company told Reuters.
Much of northern China relies on abundant coal resources for heating but has been shifting to gas in the last three years in a major push to reduce air pollution.
Gas faces competition, however, with more than half of the 5.24 million households due to ditch coal expected to switch to non-gas heating such as electricity and geothermal, according to the Ministry of Ecology and Environment, which drafts and implements China's winter anti-pollution campaigns.
Gas is five times more expensive than coal. China's economy grew at its slowest pace in almost 30 years in the third quarter, putting Beijing under increasing pressure to lower costs for industry.
"For residential users, their choice of heating source will depend on if government has money to give subsidies whereas for industrial users, such a difference in energy costs is a matter of life and death for a company," said a Tangshan-based LNG trader who sells gas to factories in the region.
Port prices for Chinese 5,500 Kcal/kg NAR thermal coal were around 562 yuan/t ($79.86/t) on November 1, the lowest level in two years.
Benchmark LNG prices in China rose 19% to 4,178 yuan/t in October from a month earlier, according to Sublime China Information Co, a China-based consultancy.
A new Russia-China gas pipeline due to start operating next month is also expected to hit LNG demand in the longer term, also contributed to the moderating LNG demand growth, analysts said.
"In the medium to long term, as delivered volumes ramp up, the northeastern region will not be able to absorb the entire contracted volumes, given that the region has relatively weak economic growth, a declining population, access to cheap coal and existing indigenous gas supply," said Jenny Yang of IHS Markit.
"When Russian gas travels farther south to the Bohai Bay region, it may still have a cost competitiveness over LNG imports in this region ...Russian pipeline gas may squeeze out some LNG imports."
Source:sxcoal