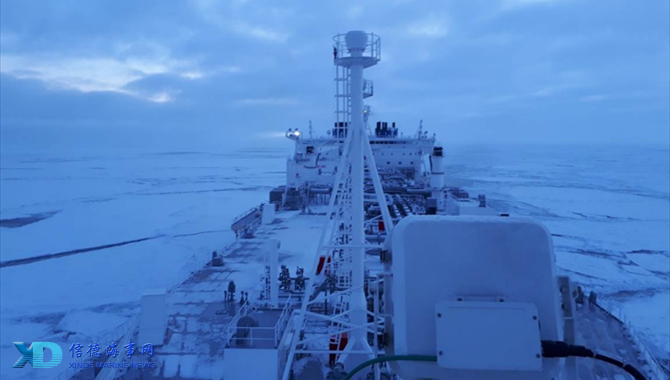 Russian natural gas producer Novatek delivered on Thursday the first ever liquefied natural gas (LNG) cargo to China via the Northern Sea Route (NSR) alongside the Arctic coast, which drastically cuts delivery time to Asian consumers.
The shipments of LNG from Yamal LNG project via the NSR to China cuts transportation time and costs in comparison to other routes such as Suez Canal.
Novatek said a ceremony was held to commemorate the arrival of LNG tankers Vladimir Rusanov and Eduard Toll with cargo capacity over 170,000 cubic meters each to the Chinese port of Jiangsu Rudong.
"Utilizing the Northern Sea Route as a viable transportation route contributes to the development of the northern regions and is very important for our country’s economic development," Novatek's head Leonid Mikhelson said in a statement.
China's National Energy Administration said China National Petroleum Corp (CNPC) will start lifting at least 3 million tonnes of LNG from Yamal starting in 2019.
The passageway is important for Yamal because it cuts shipping times to its main customers in Asia by nearly half - to 15 days - and thus saving time and Suez Canal fees incurred on the westward route.
The $27 billion Yamal LNG plant developed by Novatek and France's Total despite U.S. sanctions started exporting in December, but cargoes ferried on ice-class LNG tankers have only sailed to Europe so far.
The NSR, which is crucial for Yamal LNG, typically opens for summer navigation from June until November but severe ice conditions this year have delayed the start of deliveries.
From there, Yamal's LNG was transferred on to standard tankers for onward shipment to Asia via the Suez Canal or else sold and used in Europe at a time when the NSR was shut.
Novatek also plans to develop another large-scale project of producing the frozen gas - Arctic LNG 2, which is set to start producing LNG in 2022-2023.
TASS news agency, citing Mikhelson, said Novatek was in talks with CNPC and the Silk Road Fund on participating in the Arctic LNG 2 project.
Novatek hopes to complete the talks in the near future in order "to take an official investment decision on this project by the middle of 2019," Mikhelson was quoted as saying.
Total agreed to buy a 10 percent stake in the Arctic gas project under a deal struck during French President Emmanuel Macron's visit to Russia in May.
Novatek is interested in Saudi Aramco joining the Arctic LNG-2 plant as a partner, Mikhelson said in February, highlighting growing ties between Russia and Saudi Arabia.
Sources:marinelink