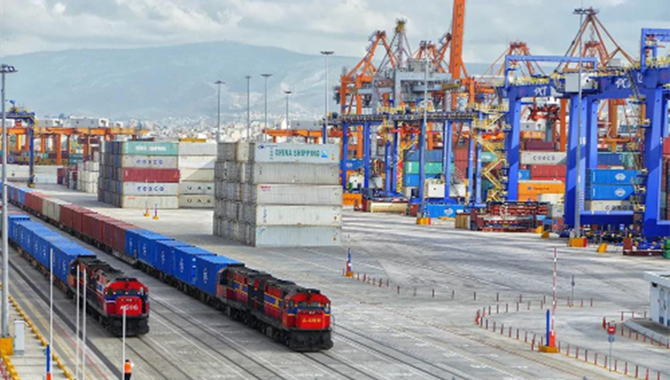 At 4:00 p.m. local time on May 5, the first "Piraeus-Sofia" Land-Sea Express Train with 29 COSCO SHIPPING containers departed from the Piraeus Container Terminal in Greece. After running for more than 40 hours, the train arrived at Dragoman Station on the outskirts of Sofia, Bulgaria, at about 8:00 a.m. on May 7.
Under conventional transportation, cargoes sent from the Port of Piraeus to Sofia usually need to be transported through a feeder liner to the Port of Thessaloniki in northern Greece before being further transferred by trucks to western Bulgaria via road transportation. With the launch of the “Piraeus-Sofia” Land-Sea Express Train, the cargo delivery period on this route is about six days shorter than the conventional route, which significantly improves logistics efficiency.
The launch of the express train has filled the gap in the market of direct cargo delivery from Piraeus to western Bulgaria. Henceforth, the China-Europe Land-Sea Express Line has extended to Bulgaria, forming a loop of sea-rail intermodal transport linking ten countries in Central and Eastern Europe. It is reported that the first “Piraeus-Sofia” Land-Sea Express Train is not only supported by major accounts like Hisense and Schenker but also favored by a large number of small and medium-sized customers.
The China-Europe Land-Sea Express Line is a newly developed critical artery connecting Europe and Asia. It has realized land-sea intermodal transportation. After the containers arrive at the Port of Piraeus by sea, they can be immediately switched to railway transportation and delivered to Austria, Czech Republic, Hungary, and other countries in Central and Eastern Europe through the China-Europe Land-Sea Express Line. Currently covering ten countries in the hinterland of Central and Eastern Europe, it is the third trade corridor linking the Far East to Central and Eastern Europe, providing a quick and affordable logistics solution for more Chinese exports to the hinterland of Central and Eastern Europe.
Source:COSCO SHIPPING