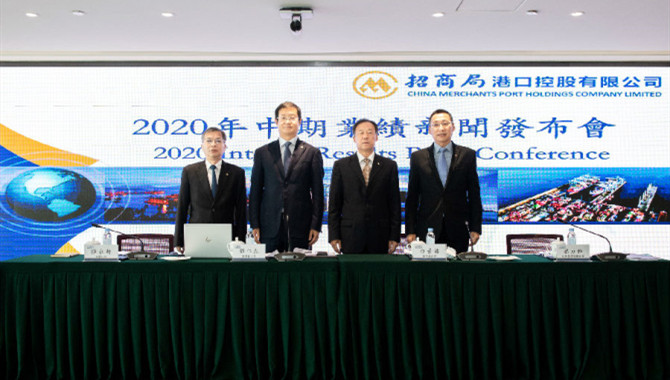 The Board of Directors of China Merchants Port Holdings Company Limited announced the interim results of the Company and its subsidiaries for the period ended 30 June 2020.
An online press conference was held on 28 August 2020 in Shenzhen and was hosted by the Executive Vice President of China Merchants Group Limited and the Chairman of the Board of CMPort, Mr. Deng Renjie. Managing Director Dr. Bai Jingtao first introduced the 2020 Interim results, Deputy General Manager Mr. Lu Yongxin and  General Manager of Finance Department Mr. Sun Ligan, also attended the meeting and answered questions from the press.
Deng Renjie said, “Since the second quarter of 2020, Chinese economy rebound with strong momentum while commodity trade growing rapidly. In July, with weakening impact from the pandemic as well as boost from new projects，the container throughput of CMPort increased by 9.4% compared with June and 14.4% compared with the same period last year. With continuous promotion of global resumption of work and production, as well as the advent of the traditional shipping season in the second half of the year, the demand for container transportation is expect to recover gradually. While strengthening pandemic prevention and promotes the resumption of work at the same time, the Group strives to maintain a stable development of port business, as well as meet our expectation on annual profit goal.”
Dr. Bai Jingtao answered question on the impact of China’s “Inner Circulation” policy on port industry，he said, “ the policy was a good news for port industry as it will boost China’s domestic trade market. Before the policy was issued, CMG has invested in Liaoning Port Group，CMPort has invested in major hub ports in China and has opened and optimized multiple high-quality“North-South routes”. By seizing the opportunity of the policy，the Group provides high quality services and  brings economic benefits to the Company.
As for the future investment plan of CMPort, Lu Yongxin said, “In the future, based on the overseas layout of "East-West routes, North-South routes, the Belt and Road", CMPort will focus on Southeast Asia, South Asia, and Africa, cautiously searching for commercially viable investment opportunities. In addition, CMPort will continue to introduce strategic investors who can bring synergies to the Group. "
When asked about the Company’s financial status, Sun Liqian said: "The Capex in the first half of 2020 was divided into two parts, including acquisition Capex of approximate HK$3 billion and PPE Capex investment of HK$680 million. In the second half of the year, CMPort will continue to improve quality and efficiency while increase operating income, strictly control the pace of investment in new projects and fixed assets, and increase cash income through capital operations by introducing strategic partners."
Deng Renjie emphasized, "The US cancellation of preferential economic treatment for Hong Kong has little impact on the port industry. Hong Kong is an international transshipment hub with port business from all over the world. The port assets invested by CMPort in Hong Kong handled approximately 5.6 million TEUs in 2019. The sanctions of the US have little impact on the Company’s overall business as the company handled more than 100 million TEUs annually."
During the first half of 2020, the COVID-19 pandemic has caused a great blow to the global economy and trade, and global demand for maritime container shipping significantly declined. the Group, with an unwavering aspiration, adhered to its strategic directives and the general operation philosophy of “enhancing core capability, insisting on both quality and efficiency, capitalizing on opportunities of this era and striving to become a world’s leading enterprise”, and shored up its foundation and made innovation with a pragmatic attitude. Striving for breakthroughs in seven key aspects, namely the development of homebase port, overseas expansion, comprehensive development, innovative development, capital operation, operation management, and marketing and commerce, the Group actively pushed forward various key tasks, and optimized and upgraded its core ports operation over the past half-year.
During the first half of 2020, the Group’s ports handled a total container throughput of 54.87 million TEUs, up by 0.6% as compared with the corresponding period last year, and bulk cargo volume of 199 million tonnes, down by 10.9% over the same period of the previous year.
As at 30 June 2020, the Group recorded a revenue of HK$4,077 million, down 8.7% year-on- year. Profit attributable to equity holders of the Company amounted to HK$1,546 million, which included a net gain of HK$277 million (net of tax) on resumption of certain land parcels at Shantou during the period, while the amount for the same period last year included a net gain of HK$3,281 million (net of tax) on resumption of certain land parcels at Qianhai and a gain of approximately HK$456 million on deemed disposal of interest in a joint venture. Due to the impact of the pandemic, the recurrent profit Note 1 decreased by 31.1% year-on-year to HK$1,409 million, which was due to the decrease in revenue and decrease in share of profits of associates. The recurrent profit derived from the Group’s core ports operations amounted to HK$2,214 million, down by 16.5% year-on-year.
To appreciate shareholders for their continuous support, the Board of the Company proposed a 2020 interim dividend of 18 HK cents per ordinary share，representing a payout ratio of 42%. Shareholders may elect to receive the interim dividend in cash or by way of scrip dividend.
Source:CMPort