China's recent move to hand out plentiful crude import quotas is expected to trigger a rush for cargoes among independent refiners as they prepare to take advantage of recovering domestic demand post the pandemic-induced lockdowns, refiners and analysts told S&P Global Commodity Insights.
But high crude prices and thin refining margins can act as barriers for both the small and integrated refineries in meeting their targets, they added.
The Ministry of Commerce in late June released 52.56 million mt (385.26 million barrels) of crude import quotas to 35 qualifying independent and non-major state-owned refineries in the second batch for 2022, S&P Global reported.
Quota volumes were up 49.2% from the same batch last year, lifting total crude import quotas for 2022 by 4.9% to 159.96 million mt as of July 1, from 152.44 million mt last year.
During the rest of the year, up to 23.89 million mt of quotas are likely to be released to 11 of the refineries in the third round of quota allocations, pushing the total volume for 2022 to 183.85 million mt, S&P Global data showed. In comparison, crude import quotas amounted to 171.75 million mt for the qualifying refineries for the whole of 2021.
S&P Global estimates that refineries have to lift their imports by 36% in June-December to use up the crude imports for 2022, from the level in the first five months.
This is because the import volume by the 33 qualifying refineries that S&P Global monitors dropped 21.6% on the year to 59 million mt (2.86 million b/d) in January-May. 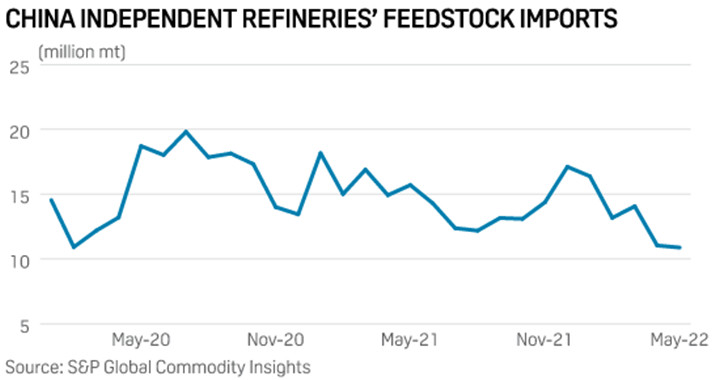 “The target remains meetable as the government eases movement controls and boosts domestic economy activities, helping oil demand recovery,” a Beijing-based analyst said, adding that the year-on-year import decline was due to wide lockdowns in April-May.
Beijing in end-May issued 33 measures to boost economy, which have been taken into effect gradually in June. As a result, the country's manufacturing sector returned to expansion territory with the PMI at 50.2 in June after contracting for three straight months, according to National Bureau of Statistics.
Amid all this, independent refineries in Shandong lifted their average run rate to about 69% as of end-June from 53.5% in April, data from local information provider JLC showed.

Meanwhile, a late allocation of the third batch of quota may slow down nine independent refineries' crude import pace.
The nine include Yatong Petrochemical, which hopes to gain the third batch of quota at about 420,000 mt after it got 410,000 mt of quotas in the second batch.
“We will surely use up the remaining quotas in the rest of the year, but an earlier allocation will give more flexibility to plan imports,” a refinery source said.
But integrated refiners Zhejiang Petroleum & Chemical and Shenghong Petrochemical are more likely to be comfortable with the current quota volume despite possibly getting an additional 17.94 million mt in the third batch, sources with knowledge of the matter said.
The 40 million mt/year ZPC holds 30 million mt of quota currently, and may gain 10 million mt in the coming round.
The refinery has been operating at three of its four 10 million mt/year crude distillation units, and was likely not to start up the fourth CDU in a short time, sources said.
“The existing quotas seem to be enough for the three CDUs, but all depends on the refining margins in the second half,” a source with ZPC said.
The 16 million mt/year Shenghong Petrochemical is unlikely to need 7.94 million mt of additional quotas on the top of the 7.95 million mt it holds, because it is yet to commission the facilities, according to sources.
“The remaining quotas of 7.95 million mt will be enough for it to consume, if it can start up smoothly after starting up at around end-August or early September,” a source close to the refinery said.
Absent refineries

In addition, North Asphalt Fuel, which was not allocated any quotas after the second batch of last year, will continue to rely on state-owned trading companies for crude import, sources with knowledge of the matter said.
The refinery was heard to have around 4.44 million mt of special quotas in the first half, and will likely have the same amount of quotas in the second half.
The refinery has processed about 3.8 million mt of crudes in the first five months of the year, including crudes from the domestic Liaohe oilfield, according to sources.