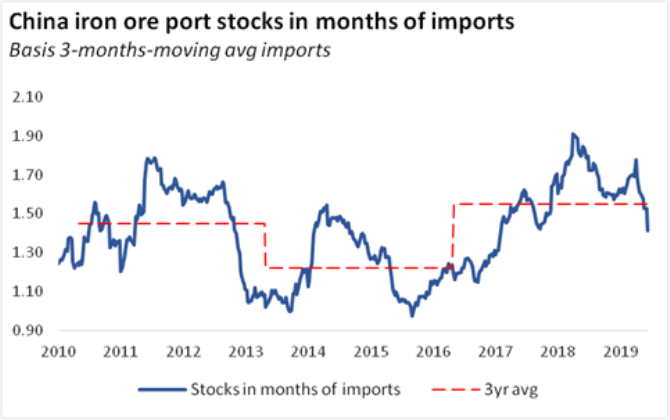 Spot iron ore prices surged past $117pmt today as Rio Tinto’s production target cut outweighed Vale’s announcement to resume operations fully at its Brucutu mine*. Although Vale’s restart could potentially release more iron ore into the market than the drop in Rio’s supplies, it is seen as more of a medium-term event.
BHP’s planned maintenance during the first week of July also threatens near-term supplies and supports prices. The mining major announced earlier in May that they would carry out maintenance between 1-15 July during when shipments of Newman fines would be delayed. Operations are to resume gradually between 16-31 July.
Near-term tightness is also reflected on the forward curve, with later-dated contracts trading at a significant discount to the front month. Currently, Q4 contracts are trading in the $95-$100pmt range versus the $117.3pmt spot.
Iron ore inventories at Chinese ports dropped to 118mt last week. With prices at a 5-year high, stocks are likely to fall further in coming weeks. There is not an immediate need to restock at the moment. However, given the prospects of near-term supply tightness and the pace of the recent stock draw-down, we may get there pretty soon.
Source:XINDE MARINE NEWS