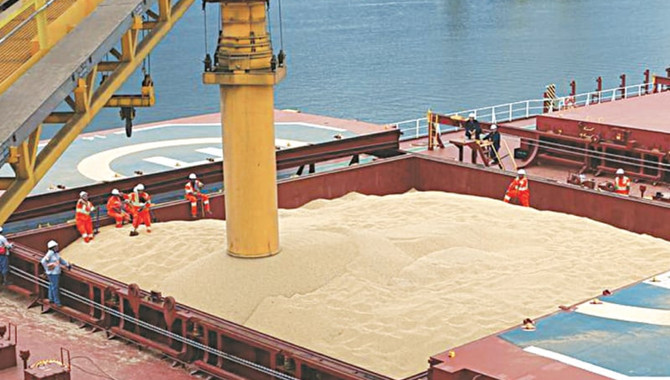 China's soybean imports in July fell 9.1% from a year earlier, customs data showed on Sunday, as poor crushing margins and weaker consumption in the world's largest buyer of the oilseed reduced appetite for shipments.
China brought in 7.88 million tonnes of the oilseed in July, versus 8.67 million tonnes a year earlier, data from the General Administration of Customs showed on Sunday.

The imports were also down 4.5% from a month ago.
Soybean prices soared this year after bad weather hurt production in and exports from Brazil, China's top supplier.
Demand from China is also weaker than a year ago as cities like Shenzhen, Shanghai and Wuhan faced mass testing, targeted lockdowns or restrictions to contain the spread of COVID-19.
“COVID lockdowns curbed consumption and profits decreased pig inventory” for pig farmers, Rosa Wang, an analyst at agriculture consultancy Shanghai JC Intelligence Co Ltd, said ahead of the customs data release.
Soybeans are crushed to make soymeal, a key pig feed ingredient, and soyoil for cooking.
“Poor crush margins and high import costs have also dampened crushers' overseas purchases of soybeans,” Wang added.
Crush margins in China have been since mid-April, with crushers in the key processing hub of Rizhao losing 644 yuan ($95.26) for each tonne of soybean processed as of Aug. 5.

Pig farmers had also been seeing margins for the first five months of the year, as pork demand contracted due to repeated COVID outbreaks.
China, the world's second-largest economy, adheres to a strict zero-COVID policy of eliminating outbreaks as soon as they emerge, resulting in restrictions on movement and targeted lockdowns that stifle consumption and economic activity.
From January to July 2022, China brought in 54.17 million tonnes of the oilseed, down 5.9% from the same period a year ago, customs data showed.