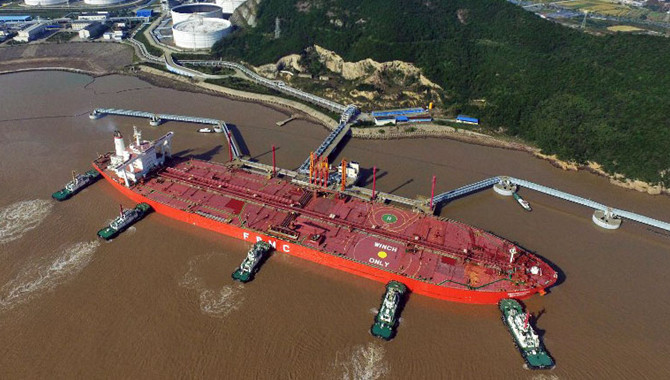 China's crude oil imports in July fell 9.5% from a year earlier, with daily volumes at the second lowest in four years, as refiners drew down inventories and domestic fuel demand recovered more slowly than expected.
The world's top crude buyer took in 37.33 million tonnes last month, data from the General Administration of Customs showed on Sunday, equivalent to 8.79 million barrels per day (bpd).
That edged up from June's 8.72 million bpd, but was down sharply from 9.7 million bpd in July 2021.
Imports for the first seven months totalled 289.84 million tonnes, or about 9.98 million bpd, down 4% versus the same period last year, as extended COVID-19 restrictions and the government's curbs on fuel exports capped crude purchases.
While independent refiners were running near 70% capacity between June and July – up from below 50% earlier in the year and mostly processing discounted oil from Russia, Iran and Venezuela – state refiners curbed rates due to thin margins.
“With oil averaged at $110 and above on a delivered basis, our refinery was operating at a loss,” said an official with a South China-based state-run refiner.
As authorities continued to impose partial lockdowns to contain further COVID flare-ups, gasoline demand recovered more slowly than expected, while inventories of diesel fuel piled up.
The data also showed refined oil product exports rebounded slightly to 3.41 million tonnes versus 3.21 million tonnes in June, though they remained 23% below the 4.64 million tonnes from a year earlier.
Year-to-date exports fell 39% from a year earlier to 25.04 million tonnes.
But exports are likely to rebound further in coming months. Nearly 10 million tonnes of quotas were issued between June and July, though the quota releases so far are 40% below year-ago levels.
Natural gas imports via pipelines and as liquefied natural gas (LNG) last month were 8.7 million tonnes, down 7% compared to a year earlier. Chinese demand for spot LNG has largely been muted this year due to high global prices.
Gas imports for the first seven months fell 9.6% on the year to 62.21 million tonnes.