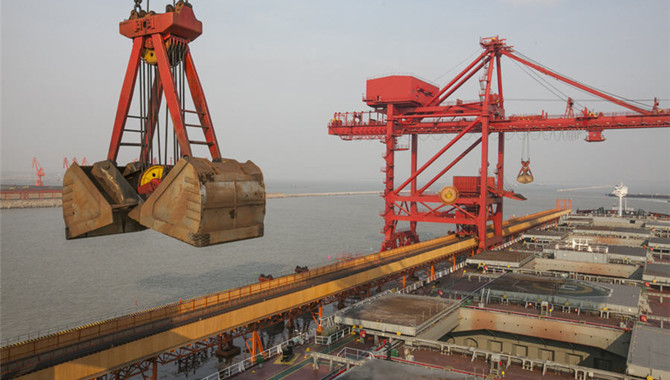 Calculating the exact impact on commodity markets from the coronavirus epidemic in China is still a fraught process, with too many unknown variables, but there are some early signs of the effect on physical shipments.
China's imports of crude oil and iron ore so far in February are running at levels well below the preceding months, and also from the same month last year, according to vessel-tracking and port data compiled by Refinitiv.
To be clear, what the numbers show is that the rate of discharge of cargoes is considerably slower, while the queue of vessels waiting to offload at Chinese ports seems to be longer than usual.
In other words, this doesn't necessarily mean that China's imports of crude and iron ore are plummeting, what it does mean is that the ports seem to be struggling to get back to normal volumes of cargo movements.
The coronavirus has killed more than 1,300 people and infected more than 48,000 people in China, but has also led to significant economic disruption as work places remained closed after the Lunar New Year holidays as Beijing worked to stop the spread of the disease.
The unloading of iron ore cargoes appears to have been affected, with Refinitiv data showing 28.2 million tonnes from 211 vessels was discharged in the first 12 days of February.
This is down from the 33.4 million tonnes achieved in the same period in February 2019, and it's also worth noting that the Lunar New Year holidays fell in February last year, which would have slowed unloading in that month.
The daily rate of iron ore being offloaded so far in February is 2.35 million tonnes, down from 2.93 million in January and 3.09 million in December.
The data also shows that 66 vessels carrying 10.3 million tonnes of iron ore are awaiting discharge, while 41 ships with 6.7 million tonnes are in the process of unloading their cargoes.
A further 192 vessels carrying 31.8 million tonnes are en route to China and expected to reach port by the end of the month.
All up, this gives a potential of about 77.6 million tonnes of iron ore arriving in China in February, down from 90.9 million in January and 95.8 million in December.
To be sure, the February numbers are still subject to revision and are likely to increase as more vessels are sighted, but the point remains that it looks like it's going to be a soft month.
Slow crude discharging
It's a similar story for crude oil, with Refinitiv data showing 80 tankers carrying 90.7 million barrels have discharged cargoes in the first 12 days of February, a daily rate of 7.58 million barrels.
This is down from the 8.88 million barrels per day (bpd) in the first 12 days of February 2019, and also lower than the 9.67 million bpd in January and the 9.79 million bpd in December.
However, for coal the story is somewhat different, with 6.8 million tonnes on 111 ships offloaded in the first 12 days of February, for a daily rate of 566,000 tonnes.
This is actually higher than the 517,000 tonnes per day recorded in the first 12 days of February 2019, but still well below the 803,000 tonnes per day in January and the 658,000 tonnes in December.
There are also 47 vessels awaiting to discharge coal, and a further 90 en route and expected to reach China before the end of the month.
But even if all these ships do arrive in time and manage to discharge their cargoes, the likelihood is that seaborne coal imports in February will come in around 20 million tonnes, still some way short of the performance of recent months.
Overall, it appears that China's imports of major commodities may be constrained in February, but slower demand because of the coronavirus may not be the main reason, rather it's the struggle to get ports working at full capacity once again.
Source:sxcoal