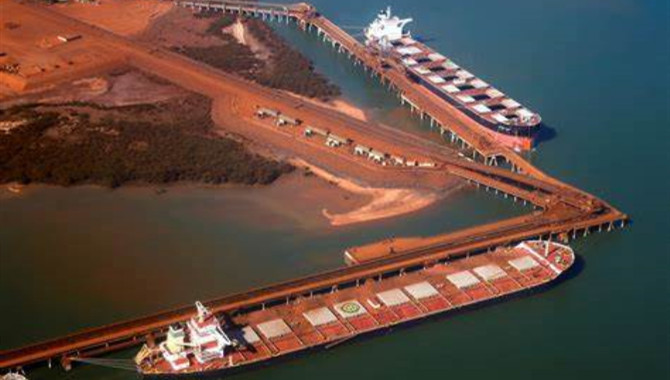 Benchmark Dalian iron ore futures rose on Friday after Vale SA halted operations at a Chilean mine and Rio Tinto reported a drop in its full-year shipments of the metal.
Brazilian miner Vale SA has halted the tailings operations at the Esperan?a mine, which can process about 1.2 million tonnes of iron ore per year, citing the need for a technical evaluation and to potentially carry out work to improve safety at the site.
Meanwhile, Rio Tinto reported a 3% drop in iron ore shipments in 2019 as the Anglo-Australian miner’s operations faced disruptions due to cyclone and a fire at a port facility.
The Dalian Commodity Exchange’s most-traded iron ore contract with May expiry rose 0.7% to 668.5 yuan per tonne by 0215 GMT. It was on track for a 1.4% gain for the week.
Spot prices of the benchmark 62% iron-content ore, as tracked by SteelHome consultancy SH-CCN-IRNOR62, fell by $0.3 to $96.2 per tonne on Thursday.
The Shanghai Futures Exchange’s most-traded steel rebar contract climbed to a one-week high, and was last up 1% at 3,592 yuan per tonne.
Meanwhile, Shanghai’s hot-rolled steel coil, used in cars and home appliances, rose to its highest in a week, gaining 0.95% to 3,628 yuan per tonne.
FUNDAMENTALS
* The Shanghai Futures Exchange stainless steel futures for February 2020 delivery fell 0.3% to 14,110 yuan per tonne.
* Dalian coking coal rose 0.25% to 1,224.5 yuan per tonne, while Dalian coke gained 0.65% to 1,871 yuan per tonne.
* China produced 84.27 million tonnes of crude steel in December, up 11.6% from a year earlier, the statistics bureau said. For the whole year, production at the world’s biggest steel producer hit record 996.34 million tonnes in 2019.
* China’s economy grew 6.1% in 2019, the slowest in 29 years but still within the government’s target of 6%-6.5%.
Source:Reuters