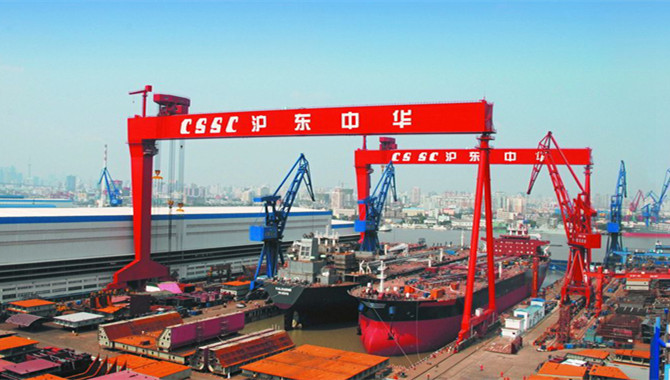 Technology breakthroughs have propelled the growth in China's shipbuilding industry over the past decades.

Chinese shipyards topped the three major metrics used by the global shipbuilding industry in 2021, with the highest number of completed orders, new orders and orders on hand.

As one of the world's leading manufacturers of large-scale liquefied natural gas (LNG) carriers, the country has witnessed rapid development of shipbuilding technologies over the past 20 years.

Huang Huabin, an official of Hudong-Zhonghua Shipbuilding of the China State Shipbuilding Corporation (CSSC), said he has witnessed how the company has overcome technology bottlenecks and mastered the key technologies for ship construction.

"In the very beginning, we imported all the equipment for automatic welding. After years of research and development, we are now able to produce most of the automatic welding machines independently," said Huang, director of the shipbuilding company's containment systems division.

Mastering the capabilities for LNG carrier design and construction, China has already successfully built and delivered more than 30 LNG carriers.

The country launched its third aircraft carrier, the Fujian, last Friday in Shanghai. Named after Fujian Province on China's east coast, the carrier was independently designed and built by the country.

Shanghai Waigaoqiao Shipbuilding Company, another major shipbuilder of China, is currently building the country's first large cruise ship, the H1508. The 323-meter-long cruise ship, planned for delivery in September 2023, will accommodate about 5,200 passengers with 2,125 guest rooms.

Officials of the shipbuilding company said they have made technological breakthroughs for the construction of the new ship.

"We have mastered the shipbuilding process and technologies such as the thin plate panel line. We have also grasped the three core technologies for safe return to port, vibration and noise and weight control. The level of technological difficulties is on par with those of the No. 003 aircraft carrier," said Zhou Qi, Deputy General Manager of the Shanghai Waigaoqiao Shipbuilding Company.