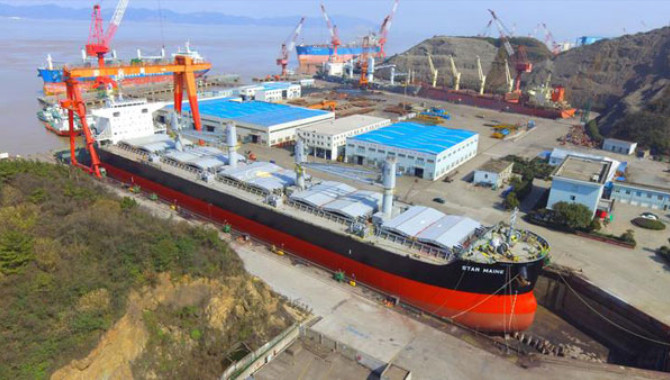 Chinese shipyards seem to be dominating the current global ship repair industry, with eight ranking among the world's top 10 ship repairers in business volume this year, according to the latest data from authoritative global research firm Clarkson Research Institute. Two of the shipyards are from Zhoushan, East China's Zhejiang province.
Xinya Shipyard and Longshan Shipyard, both located in the city's Liuheng town in Putuo district, are experiencing rapid growth in their ship repair business thanks to opportunities brought about by the global fuel sulphur limit regulation which will come into effect on Jan 1, 2020.
Statistics show that Longshan Shipyard had repaired 55 ships by the end of April since this year, generating a year-on-year increase of 48 percent in ship repair output value.
"Xinya Shipyard's annual ship repair figure is expected to rise from last year's 332 ships to 390 ships this year, with an expected output increase of 50 percent. Longshan Shipyard's annual output is also expected to rise by 30 percent," said an economic official from the administrative committee of Liuheng town.
Liuheng town's entire shipbuilding industry has been progressing steadily in recent years, with its annual output increasing by 11 percent last year. Its four top shipyards, including the abovementioned two, repaired a total of 707 ships, among which 607 were foreign vessels, accounting for half of the city's total ship repair figure during the period.
Large supporting industries have been spurred by the growing shipbuilding sector, with many high-output and high-value-added companies such as desulfuration equipment manufacturers having set up operations in the town.
These companies are expected to generate an estimated value of 5 billion yuan ($724 million) in the next two to three years.
Liuheng town has been striving to build itself into an environmentally-friendly international hub for foreign ship repair, as well as a hub for energy supply, smart manufacturing and bulk commodity trade.
Source:chinadaily