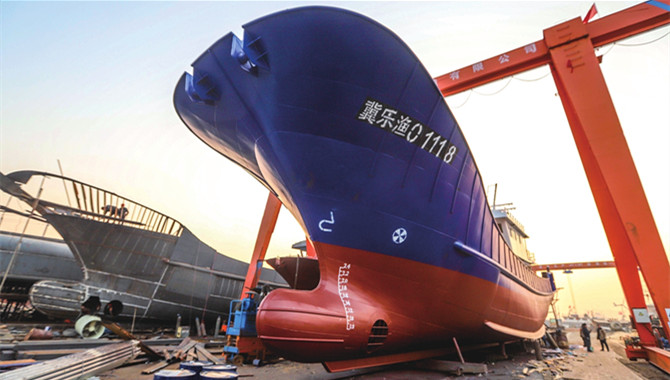 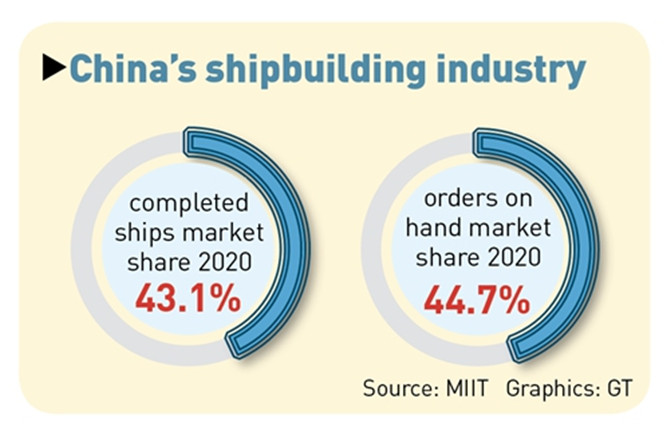 China's 2020 new shipbuilding orders exceeded those of South Korea and returned the country to the No.1 spot after two years, CCTV reported on Sunday.
According to data released by the Ministry of Industry and Information Technology (MIIT) on Friday, China's three major indicators in the shipbuilding industry - completed ships, new orders and orders on hand - were all in leading positions worldwide in 2020 with 43.1 percent, 48.8 percent and 44.7 percent of the global market share.
South Korea and Japan respectively took 41.4 percent and 7 percent of global new shipbuilding orders in 2020, and they ranked No.2 and No.3, said the report.
The three indicators are the most important metrics in the shipbuilding industry and were all occupied by South Korea and Japan before 2010. After China led the three major indicators in 2010, South Korea obtained the highest number of new shipbuilding orders in 2018 and 2019.
The Chinese shipbuilding industry's rise amid a global economic downturn showed its strong resilience and solid foundation, the report said, citing Li Yanqing, secretary general of the China Association of the National Shipbuilding Industry.
Wu Minghua, a Shanghai-based independent shipping industry analyst, told Global Times that China's shipbuilding sector developed well in 2019-2020, especially for cruise ships and liquefied natural gas carriers.
During the third China International Import Expo in Shanghai in November 2020, the first domestically built cruise ship made by Shanghai Waigaoqiao Shipbuilding Co, a wholly owned subsidiary of China State Shipbuilding Corp (CSSC), was transferred to the docks for its final assembly phase, which represented a great leap for the Chinese shipbuilding industry on the path to sweeping up "the last jewels in the crown," media reported.
"Three major sectors - container ships, oil tankers and bulk cargo carriers - built by Chinese companies also had significant increases in the last two years, and some companies can't complete their orders on time due to the large number of orders on hand," said Wu.
In September 2020, the world's first 23,000 20-foot equivalent units (TEU) container ship built by Hudong-Zhonghua Shipbuilding Co, a subsidiary of CSSC, was completed. The order was from CMA CGM, a French container transportation and shipping company, and eight more 23,000 TEU container ships will be co-built with another CSSC subsidiary Jiangnan Shipyard Co, according to the contract between CMA CGM and CSSC.
Wu stressed that the data from the MIIT showed that China's shipbuilding techniques are improving gradually and reaching the highest levels in the world.
"China's shipbuilding industry is striving to improve efficiency and master core techniques," said Wu.
Source:Global Times