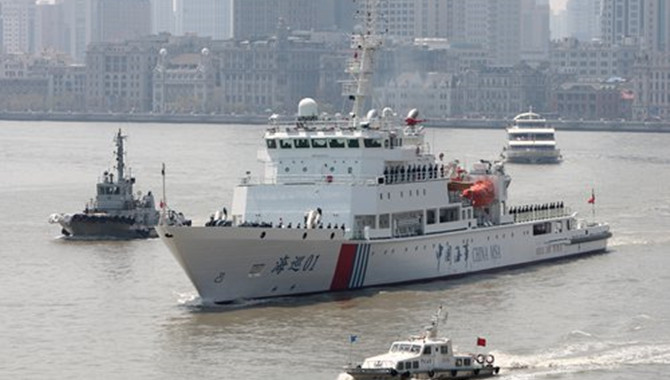 China will commission its first maritime patrol ship with a displacement of more than 10,000 tons in mid-2021, and the vessel is expected to be used in the South China Sea for missions including patrol and emergency support, an official announced on Tuesday.
The Haixun09, China’s first domestically developed 10,000 ton-class maritime patrol ship, will also carry out duties including prevention of pollution by ships, said Lin Kui, deputy head of the Maritime Safety Administration in South China’s Guangdong Province, at a press conference on Tuesday, Chinese news website chinanews.com reported on the same day.
The deployment of the Haixun09 will enhance the dynamic maritime traffic control and emergency support in Guangdong, guarantee the safety and openness of maritime transport lanes in the South China Sea, boost China’s capability in maritime traffic administration and safeguard China’s maritime interests, according to the report.
Capable of sailing around the globe and conducting rescue missions, the ship will allow China to better participate in international affairs, contribute to exchanges and visits between maritime authorities from countries in the South China Sea, enhance communication and mutual trust and expand consensus and cooperation, the report said.
Designed with a displacement of 10,700 tons, the Haixun09 is 165 meters long and has a speed of 25 knots, Lin said, noting that it can carry multiple types of helicopters for search and rescue operations.
As a large ship it can carry more sailors, personnel and equipment and sail in rough seas, experts said.
It will be equipped with many kinds of communication methods including a maritime data center and the BeiDou Satellite Navigation System, giving it strong capabilities for dynamic awareness, monitoring, information gathering and maritime supervision, Lin said.
Source:Global Times