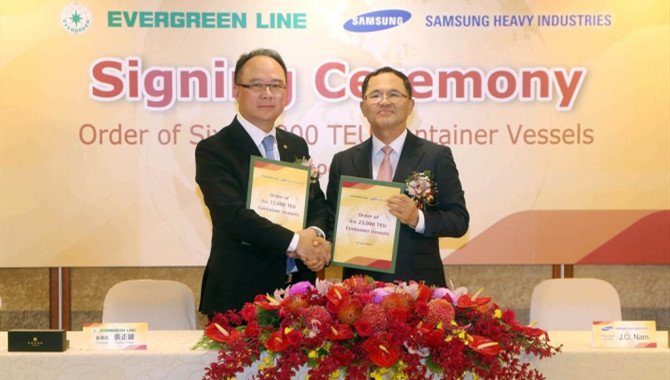 South Korea’s Samsung Heavy Industries has signed shipbuilding deals for Evergreen’s latest ultra-large containerships, valued at a total of USD 920 million.
The order was placed for the construction of six of the world’s largest container ships, with a capacity of 23,000 TEUs, by May 2022.
The giants will feature a length of 400 meters and a width of 61.5 meters. They will be capable of transporting 23,764 twenty-foot containers at once.
The order exceeds Samsung Heavy’s previous ultra-large container ship, that can transport 23,756 containers, delivered to Mediterranean Shipping Company (MSC) in July 2019.
Samsung Heavy said the vessels will be equipped with its latest smart ship technologies for low fuel consumption and safe sailing.
“The demand for ultra-large containerships is expected to continue as global ship owners have reduced cost through an economy of scale,” an SHI official said, adding that the shipbuilder is therefore expected to “keep leading the ultra-large boxships market.”
The latest contract has pushed Samsung Heavy’s orderbook to USD 5.1 billion so far this year. It now includes 35 vessels, meeting 65 percent of the shipbuilder’s annual target of USD 7.8 billion.
In September 2019, the Taiwanese shipping major Evergreen confirmed its plans to build a total of ten 23,000 TEU containerships at three shipyards.
Apart from the units ordered from SHI, the company said that China’s Jiangnan Shipyard and Hudong Zhonghua Shipbuilding would construct another two ships each. The value of the entire order stands between USD 1.4 billion and USD 1.6 billion.
Source:World Maritime News