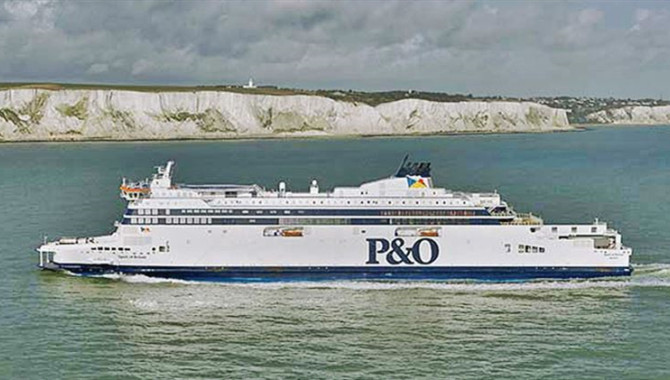 Two low-emission hybrid ferries will soon transport passengers across the English Channel from the English port of Dover to Calais in France, thanks to a new 230.6-million-pound ($285 million) contract between Chinese shipbuilding company Guangzhou Shipyard International, or GSI, and United Kingdom ferry operator P&O Ferries.
GSI will construct the two ferries, designed by Danish naval architects OSK-ShipTech, at a shipbuilding slipway in Guangzhou. P&O aims to have them on the water by 2023, with an option to order two further vessels the following year.
Each ferry will be able to carry 1,500 people between Dover and Calais, and hybrid technology will help the environment by reducing emissions. The engines will alternate between fuel and battery power depending on energy demand, reducing fuel use by around 40 percent.
"These will be the most sustainable ships ever to sail on the English Channel," said Janette Bell, chief executive of P&O.
The ships will also have the capacity to go fully electric, and will do so if and when sufficient charging infrastructure is installed at the ports.
GSI, which is wholly owned by CSSC Offshore & Marine Engineering (Group) Company Ltd under the China State Shipbuilding Corporation Group, launched the world's first 2,000-metric-ton all-electric cargo ship in 2017. The vessel can run on lithium batteries for 80 kilometers after a two-hour charge.
Dover-Calais is the busiest short sea link connecting the UK with mainland Europe. Around 9 million passengers take the journey each year, according to the UK Department of Transport, and P&O operates six passenger and freight ferries on the route.
The company and others are taking measures to cut emissions in line with UK and European Union maritime policy.
While the majority of sectors in the UK have reduced carbon from 1990 levels, aviation and shipping emissions have risen, and account for one-tenth of the UK's greenhouse gas output, according to the UK Committee on Climate Change
In July this year, the UK government stipulated that by 2025, all new ships for UK waters must be designed with zero-emission capable technologies.
"Our maritime sector is vital to the success of the UK's economy, but it must do everything it can to reduce emissions, improve air quality and tackle climate change," said Maritime Minister Nusrat Ghani. "The clean maritime plan sets an ambitious vision for the sector and opens up exciting opportunities for innovation. It will help make the UK a global hub for new green technologies in the maritime sector."
While Europe has a well-developed shipbuilding industry, companies are increasingly looking to China for new builds. In June, Italian company Moby Lines ordered two ferries from GSI, and Germany's TT-Line ordered a ferry from China's CSC Jiangsu Jinling Shipyard last year.
Dublin-based Irish Ferries is reportedly in talks with two Chinese ship makers about replacing FlensburgerSchiffbau-Gesellschaft on a new contract, as the German company is experiencing delays and financial trouble.
Source:chinadaily