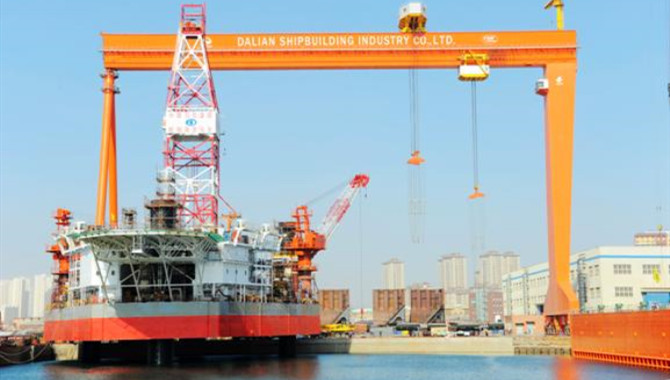 Dalian Shipbuilding Industry Co Ltd, a subsidiary of State-owned China Shipbuilding Industry Corp, the country's primary contractor for its naval force, will shift its focus from building conventional ships to high value-added vessels to cast off the negative influence caused by the ongoing Sino-US trade dispute, said a senior executive.
Due to bilateral trade tensions, the world's goods and commodity trade activities have declined since March last year and this has severely affected shipowners' enthusiasm and banks' confidence in building new bulk vessels, chemical tankers and container ships, said Yang Zhizhong, president of DSIC.
Eager to put its revenue growth on a firmer footing, the company will focus on building very large crude carriers, liquefied natural gas carriers, floating oil and gas production units, storage and offloading (FPSO) vessels, as well as making innovation breakthroughs in heavy industry, new material and environmental protection products.
"About 85 percent of ship parts and equipment such as diesel engines and marine propellers today can be purchased from domestic manufacturers," said Yang, adding the company will gather more resources to compete with South Korea in the field of building LNG carriers, pushed by China's cross-border reform in the natural gas sector, including market-oriented reform, transparency and improved infrastructure.
To ensure China's energy security, it is necessary for the nation to develop LNG carriers, because it will help the country import the increasingly widely used energy from other parts of the world such as Qatar, Malaysia and Russia, said Tan Naifen, deputy secretary-general of the Beijing-based China Association of the National Shipbuilding Industry.
According to global independent maritime research consultancy Drewry, China will import between 60 million metric tons and 100 million tons of LNG annually by 2022, which means that the market will need around 60 to 100 LNG carriers by that time.
It is estimated that there will be about 500 LNG carriers worldwide by the end of this year and the number will jump to 600 by 2022.
Building LNG carriers requires more advanced technology than building conventional storage tanks. They need to store LNG at a temperature of-163 C and are mostly powered by steam turbines. Each LNG carrier can be sold for $200 million to $250 million.
Dong Liwan, a professor of shipbuilding at Shanghai Maritime University, said domestic players certainly see this area as a must-have and not a nice-to-have market. It is time for capable Chinese shipyards to make complex, high value-added vessels to reach buyers in new segments via international collaboration, research and development activities.
DSIC is not alone, Shanghaibased Hudong-Zhonghua Shipbuilding (Group) Co Ltd, a shipbuilding unit of China State Shipbuilding Corp, is building the world's largest liquefied natural gas carrier with a capacity of 270,000 cubic meters to cope with the rising demand for the clean fuel in the nation.
The Shanghai-based company has joined hands with Norway-based internationally accredited registrar and classification society DNV-GL for construction of the carrier. Under the deal, research and development work on the new vessel is set to be completed by the end of 2020.
In addition to building LNG carriers, DSIC delivered the world's first intelligent VLCC named New Journey to China Merchants Energy Shipping Co Ltd in late July to further diversify its production line in the field of high-end shipbuilding.
Built over a period of three years, the VLCC is 333 meters long and 60 meters wide. Its dead weight is up to 308,000 tons.
In the construction of New Journey, the shipbuilder received strong technical support from several research institutes, including the Shanghai Merchant Ship Design and Research Institute and the Shanghai Electrical Apparatus Research Institute.
Yang from DSIC said the company will keep a close eye on market demand in Greece, Germany and member economies of the Association of Southeast Asian Nations to stabilize its export channels and develop markets participating in the development of the Belt and Road Initiative.
Supported by more than 1,100 researchers, the Dalian-based shipbuilder gained 20 billion yuan ($2.8 billion) of sales revenue in 2018, with 850 million yuan of profit. It is the only domestic equipment manufacturing enterprise group that runs business in five industrial sectors - military projects, shipbuilding, offshore equipment building, heavy industrial projects, ship maintenance and vessel scrapping.
Source:chinadaily