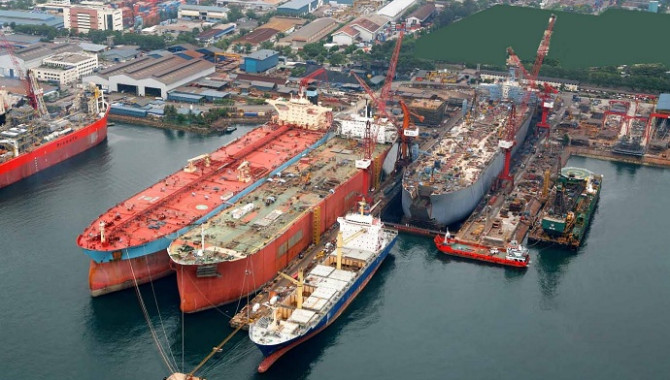 Mega shipyard mergers in South Korea and China are forging a new reality in the industrial sector that underpins the global shipping industry.
South Korea’s merger of Hyundai Heavy Industries Co. and Daewoo Shipbuilding & Marine Engineering Co. and the Beijing-engineered marriage of China Shipbuilding Industry Corp. and China State Shipbuilding Corp. will create two behemoths that will control around 46% of the global market among the world’s top 10 yards, according to marine data provider VesselsValue Ltd.
The combination comes as the global shipbuilding business is just regaining its footing after a decadelong downturn in maritime trade, which sent orders plummeting while operators in the container, tanker and dry-bulk sectors cut capacity.
Maritime executives expect the nascent recovery to pick up steam over the next few years, boosted by big trends in energy markets and new regulations. Stricter fuel pollution rules coming into effect next year will draw a new generation of vessels with advanced hull designs and engines to the water.
Shipbuilding is a vital part of the economies in Asian countries such as South Korea and China, employing hundreds of thousands of people. It is one of South Korea’s flagship industries, accounting for 7% of the nation’s exports and 5% of employment.
Beyond their commanding market share, the two groups have enjoyed steady financial backing from state-owned creditors that have bailed them out repeatedly, or massive orders from state-controlled shipowners that make up shortfalls from other clients.
Both groups are under intense pressure to improve their performance, and they will compete directly for ships such as liquefied natural gas carriers, which command prices twice as high as other vessels and bring heftier profit margins.
This leaves other smaller players both locally and in other countries like Japan struggling to compete, and it’s likely to lead to higher ship prices.
“The market share, especially on some ship types, is totally dominant,” said Basil Karatzas, chief executive of New York-based Karatzas Marine Advisors & Co. “That’s bad news for owners that now have less than a handful of yards to choose from and they can no longer play them against each other.”
Shipowners expect prices of new ships built in Chinese and Korean yards to jump between 5% and 10% after the mergers are completed.
“With tight financing, this kind of price increase will be hard to swallow,” said Nikolas Tsakos, CEO of New York-listed Tsakos Energy Navigation Ltd., which operates a fleet of 64 tankers and LNG carriers.
“But now there will be fewer ships built and that’s the most effective way to cut down overcapacity, and there will also be a clearer picture of what’s about to hit the water,” he said.
At the moment, the Korean entity looks to have the upper hand.
The Hyundai Heavy/DSME order-book of 326 ships is smaller than that of its Chinese rivals, which have orders for 428 vessels. However, the ships on order in South Korea boast an order value of more than $33 billion, compared with $19 billion for the Chinese shipbuilders.
The Korean yards now controls 54% of all LNG carrier orders, compared with 7% for the CSIC/CSSC group. The Chinese yards are stronger in lower-yielding dry bulk vessels, with a 31% market share of total orders, compared with 15% for their Korean competitors.
“It’s not only the LNG order-book,” said Olivia Watkins, head cargo analyst at VesselsValue. “Korean yards are better in terms of quality, reputation and standards, which means a Korean vessel will be valued higher throughout its life.”
Consolidation in China over the past decade has halved the number of big state-run companies under central-government control to under 100 while creating massive state players in shipping, agriculture, railways and power generation. The plan to merge CSIC and CSSC was made public in early July, six months after the Hyundai Heavy/DSME announcement.
“We had to come together to effectively compete with the Koreans,” a senior CSSC official said. “The Koreans are expected to get all regulatory approvals soon and we will get them a few months later. But the bottom line is that we are now at an equal footing on pretty much all ship types and it would have been much harder to compete if we stayed separate.”
The Chinese yards depend heavily on sister leasing companies, which are also state controlled. CSIC’s leasing arm—CSIC Leasing—roughly doubled the size of its fleet late last month with a $2 billion order of 24 vessels. In January, CSSC contracted for more than 30 newbuildings worth $1.5 billion from its leasing associate, CSSC Shipping.
In Seoul, top state financier Korea Development Bank pumped around $2.6 billion into DSME in 2017 as part of a bailout package that included a wide-ranging restructuring for reducing operating costs and getting the business in position for a broader rebound.
Ship orders globally in the second quarter of 2019 were down 73% from a year ago, according to VesselsValue. Industry executives say owners are holding back, waiting for the tariff tussle between the U.S. and China to be settled before buying new vessels.
“There is very little appetite for further bailouts by the government,” said Hyundai Heavy CEO Sam H. Ka. “So we basically came together to survive as the outlook for ocean trade remains quite uncertain.”
Source: Wall Street Journal