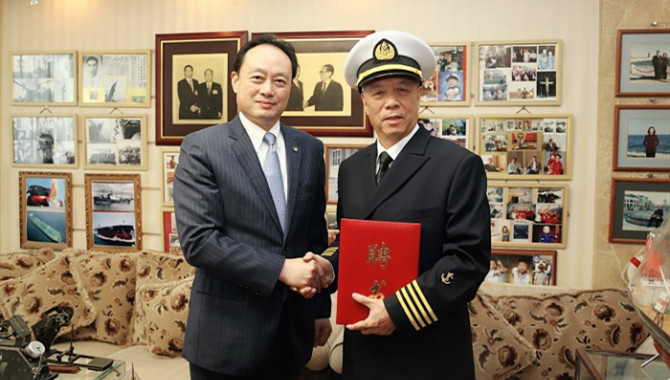 Mr Fang Jiade, the former Secretary of the Secretariat of the All-China Federation of Trade Unions and the Chairman of the China Seamen’s Association, was hired as the honorary captain of CMES’s NEW VISION. Mr Xie Chunlin, Chairman of CMES, officially issued the appointment letter on 28 October 2019.
The appointment ceremony was held in Capt. Fang’s appartment. During the ceremony, Capt. Fang delivered an emotional speech about his father Fang Zhenliu’s story on uprising with Hailiao in September 1949, and expressed appreciation for the rapid development of the China Merchants and the nation’s shipping business. He is very pleased to be the honorary captain of NEW VISION and hopes to contribute to the further development of China Merchants Shipping.
Mr Xie was very grateful to Capt. Fang for his concern and support. He also expounded on China Merchants Group’s Chairman Mr Li Jianhong’s advocation on the spirit of Hailiao, which has first been expressed at the 70th anniversary of the Group’s commemoration of the uprising of the Hailiao Vessel on 28 September 2019, that is, the patriotism of strengthening the conviction and serving the country for the people, as well as the spirit of perseverance and the courage to move forward.
The appointment ceremony is not just only a major commemoration of the world’s sea history, but also the inheritance and promotion of CMES’ Hailiao spirit. As expressed by Mr Xie, the CMES will not forget the initiative on its business, and to attach to its the mission to write a new chapter for the shipping industry. 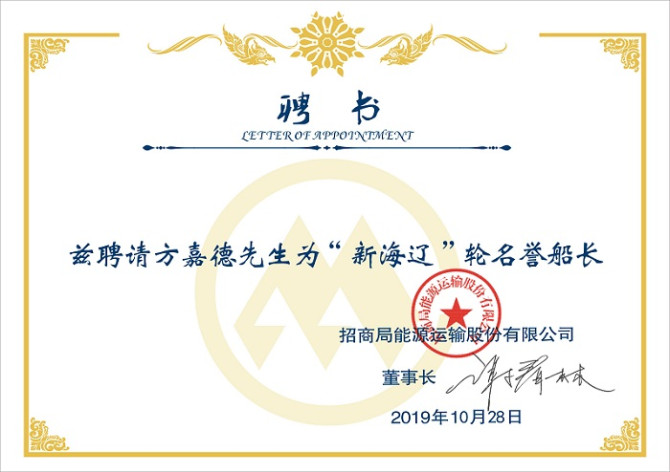