Welcome to 2023 and the first Baltic Asia Freight Report of the year.

The decline in dry bulk freight rates in the first week of the year was no surprise to the market, due to lackluster activity and seasonal headwinds since the holiday season started at the end of last year. The average rate of the Capesize 5 Time Charter (C5TC) routes had its sharpest fall on 3 January, losing almost 30% from the last publishing day 10 days ago, or about 35% lower in value compared with the same period last year.

However, the Capesize still commands the highest average rate among all four dry sectors. Recent demand and cargo enquiries are determining which direction the market is taking before the fast-approaching Chinese New Year.

Meanwhile, it has been about a year since the Baltic first started producing a fortnightly Asia freight report, focusing on the shipping market and discussing topics related to Asia, especially the Chinese market. Let us review what we covered in 2022.

The first report in February considered the rise in fuel prices at the beginning of the year and the knock-on effect on bunker prices in dry bulk shipping. The International Maritime Organization (IMO) is regulating more on the types and standards of marine fuel oil. The resultant increase in costs to move cargoes have been passed on to customers and indirectly affects various aspects of our daily life.

Climate issues, such as fog in northern China in winter, and typhoons and heavy rains in summer in the Pacific, often lead to port delays or closures. These weather events have the potential to delay shipping schedules causing knock-on effects for vessel planning in the short term. This type of pressure usually results in charterers scrambling to find tonnage to cover their logistics requirements, triggering rates to increase.

In March and April, we focused on Covid-19 and the lockdowns in Shanghai. Shanghai is a major trading hub for dry freight, tanker and container cargoes, and also has top-class shipyards and dry docks. Vessel traffic in the region runs like a superhighway up the Yangtze river to numerous inland port infrastructures. Shipping and Shanghai are major links in a long logistics chain for which products are connected to almost all parts of the world.

In July, the ninth edition of the Xinhua-Baltic International Shipping Centre Development Index Report was released. Shanghai was ranked number 3 among the world’s leading maritime centres. 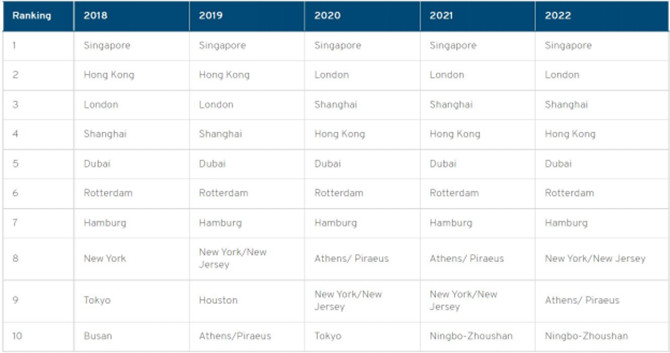 This index was first launched in 2014 as a collaboration between the Baltic Exchange, the only independent source of global maritime market information, and Xinhua, the Chinese state news agency. It is a numeric grading system that evaluates port infrastructure, shipping services and general environment.

It was reported that Asia controlled 43% of global tonnage by the end of 2021, or about 48,000 vessels of over 600 million tons, compared with 42% held by European owners, who control a fleet of about 30,000 ships. Chinese owners have been the main growth drivers, doubling their fleet in the past decade to over 200 million tons to hold a 15% global share – mainly through newbuilding orders.

These figures correspond with China being the fastest-growing region for Baltic membership. The number of Chinese companies joining the Baltic Exchange has risen sharply in the past two years or so from 16 to 40, including China-headquartered large and small shipowners, independent shipbrokers, charterers and traders.

Chinese trading houses are certainly seeing the importance of managing the ocean-based transport element of their commodity prices. Volatility in the dry bulk markets has also been a strong driver with several companies looking to employ more sophisticated freight risk management strategies using Baltic assessments. For many Chinese companies, membership of the Baltic Exchange means better access to the international shipping markets. Beyond that, being part of an international institution with over 250 years of history is important as well as being recognised as part of a global community which commits to good governance and business practices espoused in the Baltic Code.

On 1 September, the Baltic Exchange, through its market data subsidiary, Baltic Exchange Information Services Ltd (BEISL), and Zhengzhou Commodity Exchange agreed an MOU to cooperate on developing shipping derivatives. BEISL and ZCE will work together on research and development of a futures contract settling against the Baltic Panamax Index (BPI) in China.

The BPI is a composite index comprising five key international Panamax routes. Panamax vessels mainly transport coal, grain and other goods, and are a major force in dry bulk shipping. By weight, more than 90% of dry bulk cargo in international trade is transported by ship. Dry bulk shipping is international in nature, has an active diverse range of participants, and frequent freight rate fluctuations.

In October, we considered the important work carried out by seafarers and how Covid-19 has affected them. According to the latest guidance released by Maritime Safety Administration of China at the end of last year (2022), crew members no longer need to perform a Covid test for port operators before the vessel berths at port. A negative Covid test or a health code is also no longer needed either. Seafarers and port workers now can change shifts and return home more easily. Hope has been raised since pandemic measures have been relaxed.

Energy concerns have been at the forefront of many discussions. In order to improve air quality, preserve the environment and protect human health, the IMO has made changes to the regulations which are affecting the industry. At the beginning of 2023, the agenda includes the rollout the Energy Efficiency Ship Index (EEXI), to improve the energy efficiency of the fleet. In addition, the Carbon Intensity Indicator (CII), will be the next agenda item to follow which links greenhouse gas emissions generated by vessels to the amount of cargo carried over the distance travelled.

Other topics covered in 2022 include the Russia-Ukraine crisis, seafarers’ warfare under the shadow of Covid, and Baltic’s Ship Operational Expenses Indices.