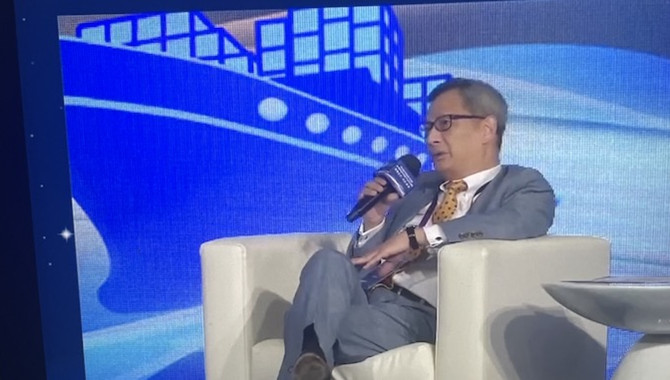 Eddie Lee,Group Engineering Director at Hutchison Port Holdings
Hutchison Port Holdings Group Engineering Director Eddie Lee said the port operator had begun trialing hydrogen fuel technology for its internal vehicles at the company’s facility in southern China.
Speaking at the 2nd World Maritime Merchants Forum (15-16 November) Mr Lee outlined the challenges facing the company’s terminals in reaching emissions targets.
“We must reduce our CO2 emissions by 2030. It’s a hard target but we should be able to achieve it by switching from diesel to electric,” he said.
“But the longer term target of zero emissions by 2050 is a totally different game.” He added. Reaching zero emissions involves what are known as scope 3 emissions which are the result of activities from assets not owned or controlled by the reporting organization but that the organization indirectly impacts in its value chain.
In this respect Mr Lee suggested that hydrogen as an energy source bas one of the most promising alternatives. “The hydrogen fuel cell is not a new technology. The problem will be the generation, storage, and supply of hydrogen within the port zone,” he said.
“If you have a hydrogen storage and filling facility 40km away from your port the mileage covered on a return trip would probably consume half the fuel. So, such a facility must be very close, – ideally within the port zone.” Mr Lee added that the arrangement would raise safety issues which are being assessed but maintained that hydrogen still looked to be the most promising.
Looking to the 2050 zero-emissions target Mr Lee said it may not be possible to reach with alternative fuels alone and envisioned that ports would have to trade carbon credits to make up the shortfall.
A spokesperson for Modern Terminals in Hong Kong said that they too were exploring the possibility of trialing hydrogen to power internal vehicles next year.
Currently Hong Kong lacks the necessary legal framework to enable the employment of hydrogen-fueled vehicles that Mr Lee envisages. But comment gained from the Environmental Protection Department (EPD) suggests that a way forward is imminent.
“In Hong Kong, the Chief Executive’s 2022 Policy Address announced that the Government would conduct trials of HFC buses and heavy vehicles in 2023 and formulate the long term strategies for the application of hydrogen energy in road transport by 2025,” said an EPD spokesperson.
“In this regard, the Environment and Ecology Bureau is leading an inter-departmental working group (IWG) to push forward the aforementioned trials of HFC vehicles with a view to assessing their operational performance under local circumstances. The Government will also conduct risk assessments on hydrogen refilling stations, the arrangements of hydrogen supply, and HFC vehicles on road, etc., as well as review relevant regulations, standards and technical guidelines, with a view to preparing for the establishment of a legal framework for the local use of hydrogen fuel.
“The IWG will review and assess applications of trial projects and advise on relating aspects of the applications such as safety and planning before the establishment of the relevant local legal framework,” the spokesperson concluded.