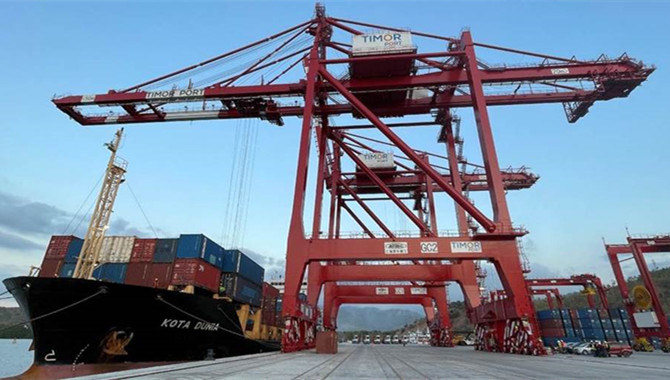 Mariana Express Lines (MELL), a subsidiary of Pacific International Lines (PIL), announced that two of its vessels Kota Dunia and Selatan Damai, made successful maiden calls at the new Tibar Bay Port over two days from 14 September 2022 to 16 September 2022, to support the operational trials of this new deepwater port. This new development, built in compliance with globally recognised environmental standards, aims to deliver performance and productivity which are comparable with the largest seaports in the world.

Over the two-day test phase, the efficiency of the digital operating systems of the terminal shone through asthe port handled nearly 1,000 containers on board both ships. With new optimised port call practices, the port call process in future is expected to be even shorter and more efficient, thereby bringing savings while reducing carbon emissions for shipping lines.

Lee Chin Giaf, General Manager, MELL said “MELL has served Timor Leste for over a decade. We are very pleased to have the opportunity to show our commitment to the growth of Timor by deploying two of our vessels to participate in the testing of the country’s new world-class facility. We look forward to working closely with Timor Port and Bolloré Ports on the successful development and launch of the new port as part of its ambition to drive stronger economic growth for the country. ”

Laurent Palayer, CEO of Timor Port SA said “MELL and Bolloré Ports enjoy a long standing relationship underpinned by close co-operation over the last decade and with the opening of Timor Bay, we will further strengthen our partnership to bring economic progress to Timor Leste.”

Tonnie Lim, Chief Trade Officer, PIL added, “Asia is a key focus region for PIL, and our subsidiary MELL enables us to specialise in certain niche routes within Asia Pacific. Timor, with its central location in Asia and proximity to the large Asian market of Indonesia, has immense development potential.  PIL and MELL are confident that Timor will continue to grow from strength to strength and we stand ready to meet the needs of our customers for enhanced connectivity to Timor and other parts of Asia.”