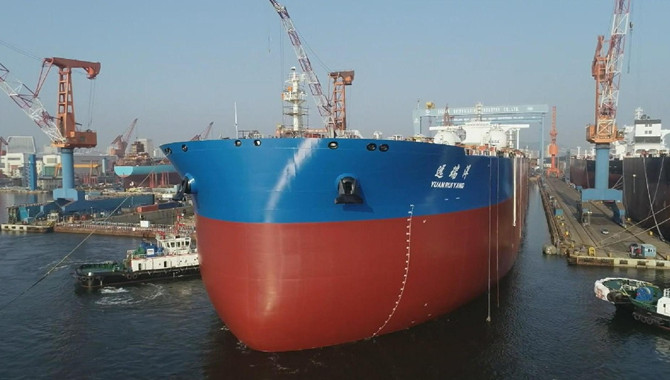 China has made multiple technological breakthroughs in the marine industry this year, and the country's ports posted smooth operation in July with steady throughput growths.

The ship, 333 meters long and 60 meters wide, uses LNG as the main fuel. It is equipped with LNG dual-fuel main engine, generator and boiler.

The use of clean energy in shipping can help reduce sulfur oxide emission by 99 percent and particulate matter by 98 percent, compared with other oil tankers.

The Subsea Xmas Tree is the core equipment in the offshore oil and gas production system. Only five enterprises in the U.S. and Europe have mastered the design and construction of the underwater extraction system.

The installation of the "Xmas Tree" marked a further step in China's deep-sea oil and gas resource development.

The system is able to produce about 200 million cubic meters of natural gas per year, according to CNOOC.

The total throughput of ports monitored by the China Ports and Harbours Association rose 8.4 percent year on year in July, with that for foreign trade climbing 6.3 percent.

In July, the container throughput of eight coastal container hub ports increased by 12.7 percent over one year ago.

The Shanghai port and the Ningbo-Zhoushan port, two of the country's largest ports, saw their container throughput up 16.8 percent and 25 percent year on year in July respectively.

"The development of China's marine transport remains steady on the whole. The coastal areas have made active efforts to ensure smooth operation of the collection and distribution systems of ports, and solve overstocks at ports through ways including diverting land transport to water transport and combining river and ocean transport routes. Relevant areas have also expanded outbound routes to ensure smooth transport and stable supply chain," said Cui Xiaojian, deputy director of the National Marine Information Center under the Ministry of Natural Resources.