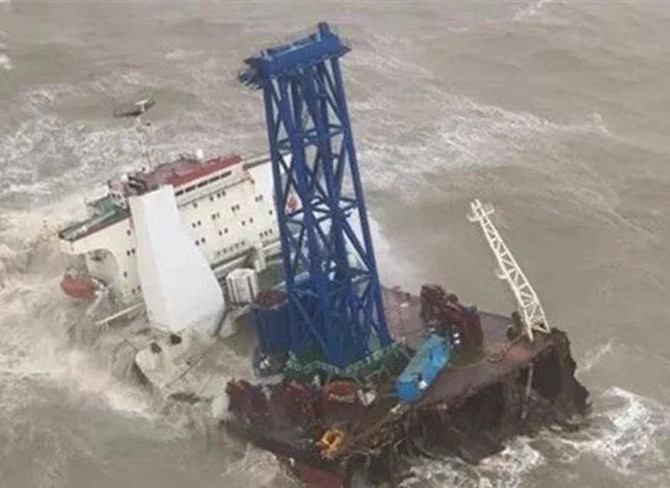 Three are rescued as powerful storm brings heavy rainfall to South China
Three people have been rescued and 27 are missing after their ship broke in two during a typhoon off the coast of Yangjiang, Guangdong province, on Saturday morning.
The vessel named Fujing 001, which had worked at an offshore wind power farm, was moored ahead of Typhoon Chaba's arrival and was sunk by the storm, according to the provincial maritime search and rescue center.
After a distress signal was sent at 3:50 am on Saturday, a number of rescue, patrol and commercial vessels were coordinated for rescue efforts.


No new survivors have been found by Sunday night as the search area continuously expanded for 27 missing crew members from a floating crane in the South China Sea, according to rescuers.
The crew members went missing after the floating crane sank in waters off the coast of south China's Guangdong Province on Saturday morning, according to the provincial maritime search and rescue center Sunday.
As of 12:00 Sunday, 38 rescue vessels had been dispatched and rescue aircraft made 14 trips to search for the missing people, covering an area of 700 square nautical miles where waves were three to four meters high.
At Berth No. 1 in Yangjiang Port of Yangjiang City, which is about 28 nautical miles or 50 kilometers away from where Fujing 001 sank, rescuers are working tirelessly.
Rescuers are expanding the search scope around the wreck point to find the missing persons, which is the current focus of the whole operation, according to the Yangjiang Maritime Safety Administration.
Under the organization of the Guangdong Provincial Government, various departments have been involved in the rescue, including maritime affairs and fishery administration of Yangjiang City and the province's other cities.
In addition to rescuers, each rescue ship is also equipped with medical workers so that medical assistance can be provided to any found crew member as soon as possible.
At 3:50 Saturday, the floating crane of an offshore wind farm project was found via a monitoring system to be in danger after its mooring chain broke while it was taking shelter from typhoon Chaba at the No.2 anti-typhoon anchorage for large ships in Yangjiang Port, about 18 nautical miles away from Berth No.1.
The floating crane later sank. Three people were rescued at about 12:00 Saturday and 27 others fell into the water and are missing, according to the provincial maritime search and rescue center.
Chaba, the third typhoon of the year, made landfall in the coastal area of Maoming City, Guangdong, at around 15:00 Saturday.